Below is a detailed account of the 1891 Yale vs Princeton football contest.  This game was played on Thanksgiving Day (November 26, 1891) on Manhattan Field in New York City. 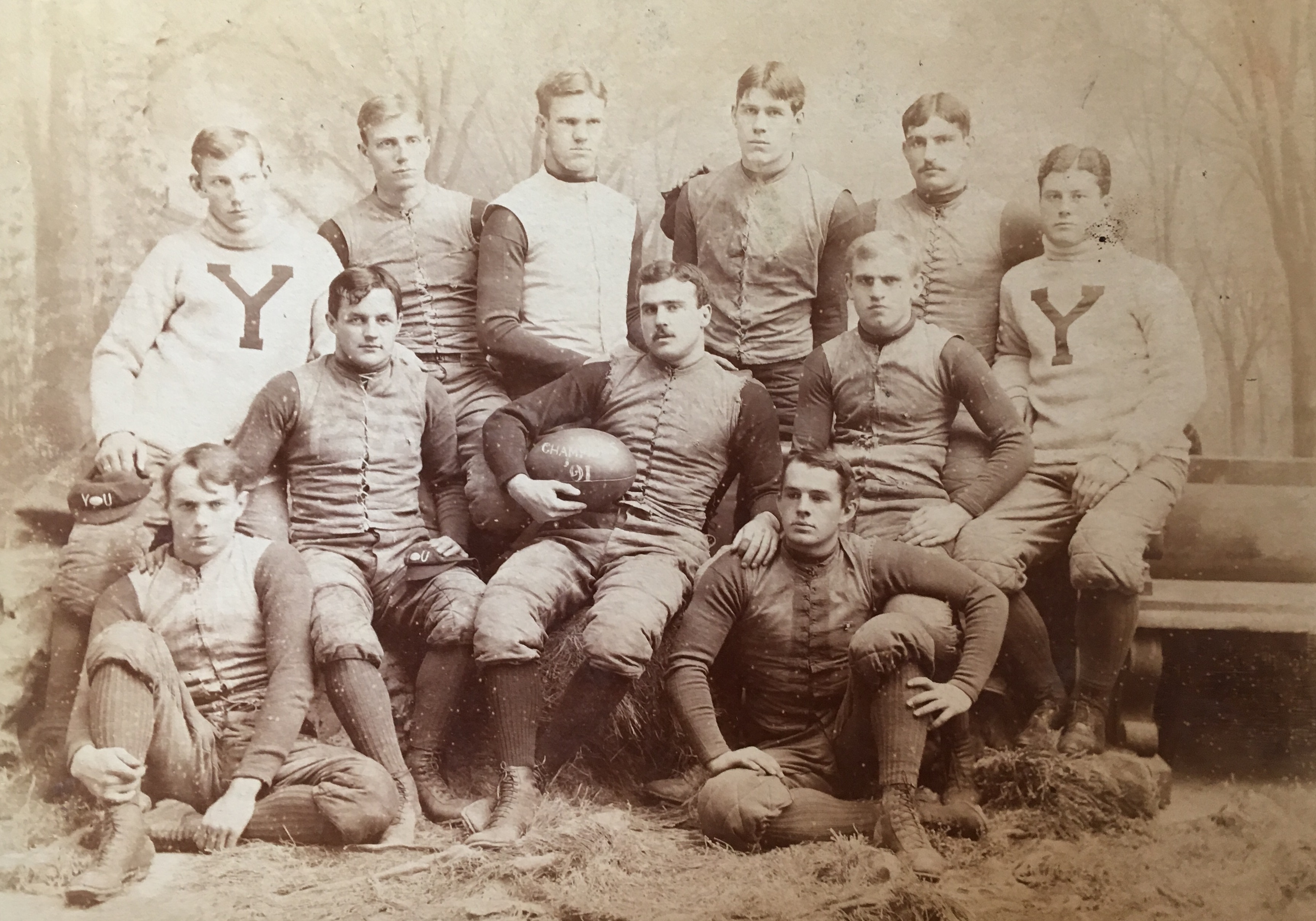 Poe begins the game by gaining seven yards for Princeton, protected by a wedge.  Flint is finely tackled by Heffelfinger with a loss of five yards.  Wallis stops Poe’s dive at the center and Homans is forced to punt, McCormick getting the ball on Yale’s thirty-yard line.

McClung is the first man tried for Yale and responds with a pretty run of fifteen yards around Warren’s end, aided by the interference of Bliss.  Wheeler’s off-side play gives Yale five yards.  McCormick can only gain one yard through the center, and Warren downs Bliss with a loss of five.  Bliss then kicks to King and on the next down Homans punts to McCormick.

Morison bucks the center for one yard and Wheeler again gives Yale five yards by his off-side play.  McClung duplicates his first run of fifteen yards around the end, but tackles by Wheeler and King prevent Yale from advancing further.  Bliss punts to Homans, who is instantly tackled by Hinkey.

Princeton attempt to gain ground by running and Homans kicks on the first down.  McClung is given five yards for being thrown after making a fair catch, but Sanford loses the same amount on a good tackle by Vincent.  McCormick goes through the center for ten yards and McClung covers the same distance around the end both being tackled by Homans.  Bliss loses the ball to Warren and Homans punts it back to the center where Bliss secures it. 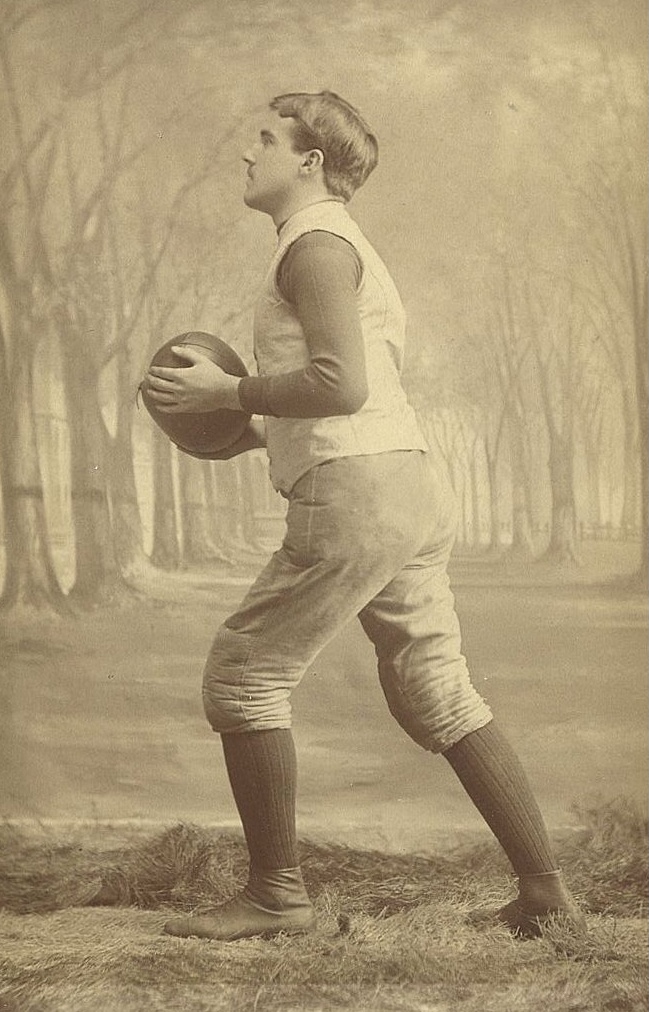 Heffelfinger rushes five yards between Holly and Wheeler.  McCormick gains three yards and Wheeler gets past Holly for six more.  Bliss fails to advance the ball.  An unfortunate mistake in the signals follows, but Bliss redeems the play by an excellent punt.  Flint is given five yards for being thrown after a fair catch.

Hartwell tackles King for a five yard loss and Homans kicks a long one to the center of the field.  McCormick gets through the center for five yards, Poe doing the tackling.  McClung is stopped without gain by Harold.  After an ineffectual attempt by McCormick to make the required distance, Bliss kicks to Homans.

Hartwell tackles Riggs, but Poe slips through the rush line for five yards before he is tackled by McClung.  Poe is downed by Morison.  McCormick gets five yards for being thrown after making a fair catch of Homan’s kick.  McClung for the third time gets around Warren’s end for twelve yards but is brought down on a tackle around the ankle by King.  Bliss is sent around Vincent’s end for five yards, and McClung follows with a dodging six-yard run right through the center.  Winter loses five yards by fumbling, but recovers the ball.  McCormick, finding an opening between Vincent and Holly, goes through for eight yards.   Homans makes a fair catch of Bliss’s punt.

Poe failing to advance the ball, Homans punts out of bounds and McCormick falls on the ball.  Heffelfinger gets no further than the Princeton rush line, and Holly’s tackle of McClung loses Yale five yards.  Bliss kicks to the middle of the field, where Poe makes a fair catch.

King goes but two yards when Hartwell throws him, and Bliss tackles Flint with a loss of three yards.  Homans resorts to the usual punt, McCormick getting the ball out of bounds.  McCormick and McClung buck the center for seven yards.  Morison cannot gain, but McCormick rushes five yards through the center.  Aided by Hartwell’s interference, Bliss makes the longest run of the first half, one of twenty yards around Vincent’s end, being finely thrown by Poe.  McClung rushes one yard through the center and McCormick adds six more in two dives at the rush line.  King tackles McClung splendidly.  Three yards is Bliss’ share of the gain, but on the next down Princeton is awarded the ball for holding. 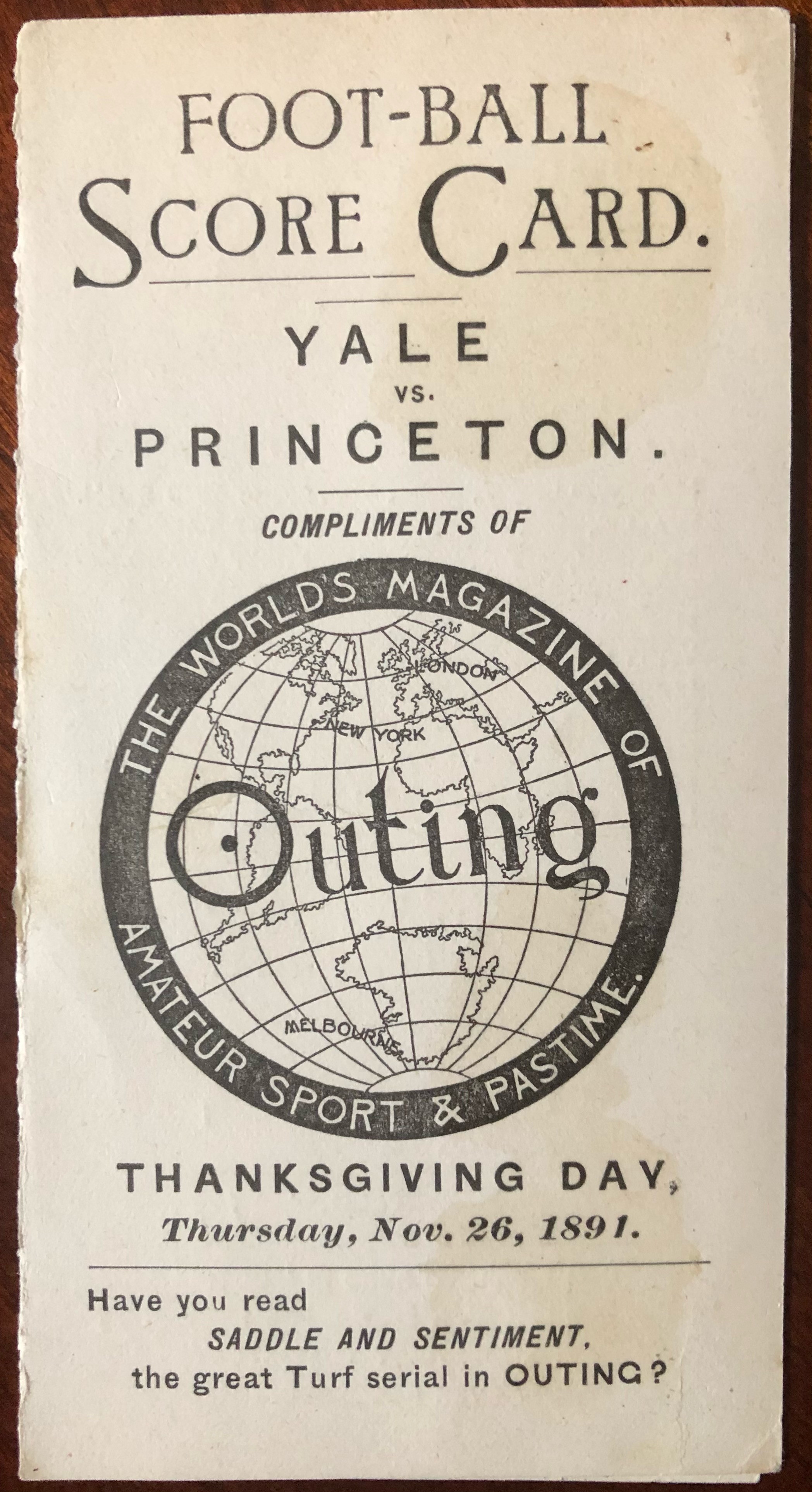 After Heffelfinger tackles Poe with the loss of a yard, Homans kicks to McClung.  A slight gain by McCormick follows.  Yale is given five yards for King’s off-side play.  A double pass, McClung to Bliss, yields but three yards, as Vincent tackles well.  Off-side play again gives Yale five yards.  Yale then advances the ball thirty yards on rushes by Winters for five yards, McCormick for two, McClung for three, Bliss for eight (around the end), McCormick for three, McClung for five (around the end), and five yards for Princeton’s off-side play.  Here Princeton gets the ball for holding, but immediately loses it on a fumble by King, Hinkey falling on the ball.

McClung protected by good interference, circles the end for five yards.  Winter fails to gain and although Bliss gets three yards around the end, the ball goes to Princeton at their twenty-yard line on four downs.  An exchange of punts between Homans and Bliss follows.  Time is called with the ball in Princeton’s possession at their thirty-five yard line. Score for the first half: Yale 0, Princeton 0.

Yale having the ball at the center of the field sends Sanford for six yards in the wedge.  Bills fails to gain being well tackled by Harold.  McClung rushes three yards through the line, and Winter follows with a pretty rush of eight yards.  McClung again bucks the line and covers the required five yards.  Riggs breaks through and prevents Morison from gaining and on the next play downs McClung with a loss of four yards.  Winter is sent at the line twice and gains five yards each time.  McClung is forced ahead six yards before he is tackled by Wheeler.  McCormick advances ten and Morison five more. 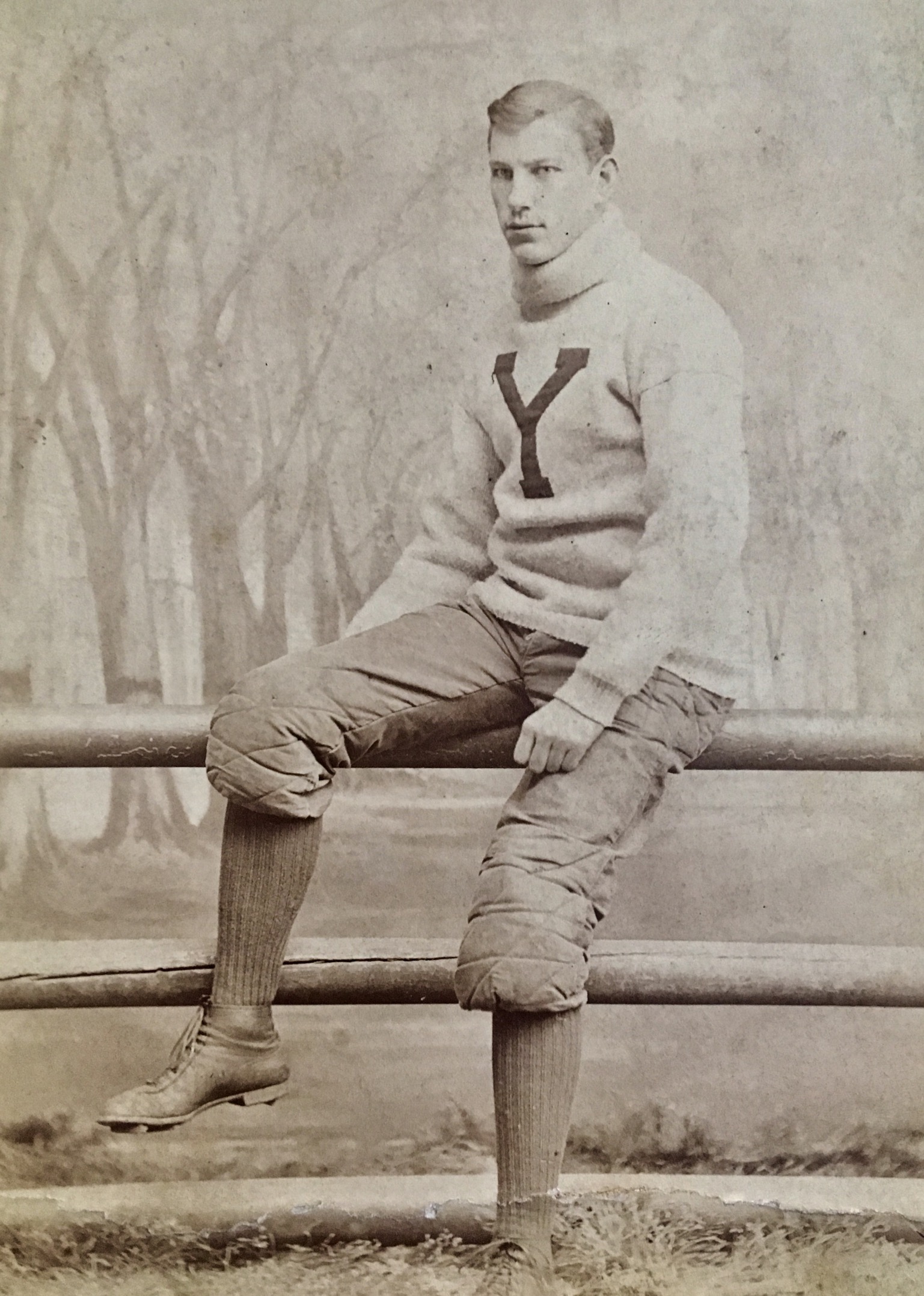 Winter’s gain is five yards, and McClung attempts to catch the end, but runs of out bounds after gaining three yards.  This brings the ball within one yard of Princeton’s goal line, and McCormick is rushed over the line scoring the first touch-down for Yale ten minutes after time was called.  McClung fails at the try for a goal.

Princeton carries the ball out to the twenty-five yard line.  Heffelfinger breaks up the wedge and tackles Poe before he can gain.  Flint makes four yards through the center, tackled by Bliss.  Poe runs around the end but only advances two yards before he is beautifully tackled by McClung.  On the next play King fumbles the ball and Hinkey falls on it in fine style.

The criss-cross trick is then tried with great success, Bliss passing the ball to McClung who is only stopped after a grand run of thirty yards, Heffelfinger and Hinkey interfering.  This run brings the ball to within a yard of Princeton’s goal line.  Winter is sent over for a touch-down.  McClung fails to kick a goal.

Princeton again lines up at the twenty-five yard line, but fails to gain, as Heffelfinger tackles Poe with a loss of two yards.  Homans punts out of bounds and McClung gets the ball.  Bliss carries the ball four yards through the line, but it is given to Princeton for holding.  Homans attempts to punt, but the ball is stopped by Heffelfinger, Hartwell getting it and dashing fifteen yards before being downed.

Bliss makes a run of ten yards around the end, and is tackled by Vincent.  McClung and McCormick buck the center to good advantage, each gaining six yards.  Five yards is given to Yale for off-side play by Riggs.  Holly prevents Bliss from making any gain.  Morison is stopped by Harold, making Yale’s third down.  The ball is then passed back to McCormick who standing on the thirty-yard line, kicks a very difficult goal from the field.

Poe starts with ball far from the center of the field, and gains eight yards on the kickoff.  Barbour breaks through and tackles Holly without gain.  Homans punts, McCormick falling on the ball.  Yale is again given five yards, Holly being off-side.  Winter makes four yards through the line, but Riggs forces McClung to lose a like amount.

Harold gets through and stops Bliss’ kick, Warren falling on the ball.  Poe and Flint advance the ball ten yards, but Homans loses five on a fine tackle by Bliss.  Homans makes a hopeless attempt to drop a goal from the forty-yard.

McClung starts Yale’s play from the twenty-five yard line, and is downed by Harold after gaining three yards.  Winter is rushed ahead for seven yards, and Bliss for three more.  McCormick then makes one of the prettiest runs of the game, breaking clear of the entire line, and covering twenty-five yards before he is stopped by Flint.  Wheeler prevents McClung from gaining.  Bliss makes six through the line and twelve more around the end.  McClung fails to gain on a tackle by Warren. 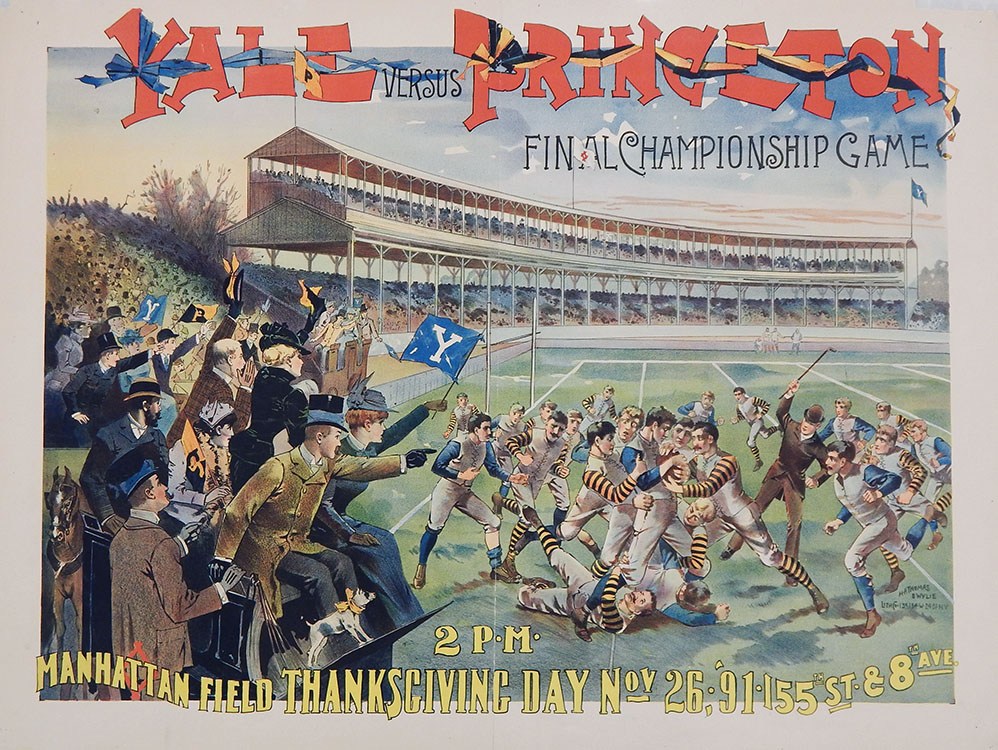 McClung and Winter each make two yards.  Yale obtains five yards for off-side play, but Riggs secures the ball on a fumble.  Flint fails to gain, Homans is prevented from kicking by Morison who breaks through the line and downs him as he gets the ball.  Homans then punts, McClung making a fair catch.  Sanford loses two yards on the V.

Bliss punts, Poe getting the ball out of bounds.  Flint is unable to gain and Homans kicks to McClung who again makes a fair catch.  McClung runs around the end for fifteen yards, being forced out of bounds.

Two minutes before the game is called, Bliss takes the ball from McClung on a double pass and makes the most remarkable run of the game.  He circles Vincent’s end and with the aid of Heffelfinger and McCormick passes Poe, Flint and Homans.  The remainder of the run is a race down the field, and although King catches Bliss at the ten-yard line, the latter shakes him off and touches the ball down exactly between the Princeton goal posts after a run of sixty-five yards.  McClung kicks the goal.  Time is called almost immediately afterward. 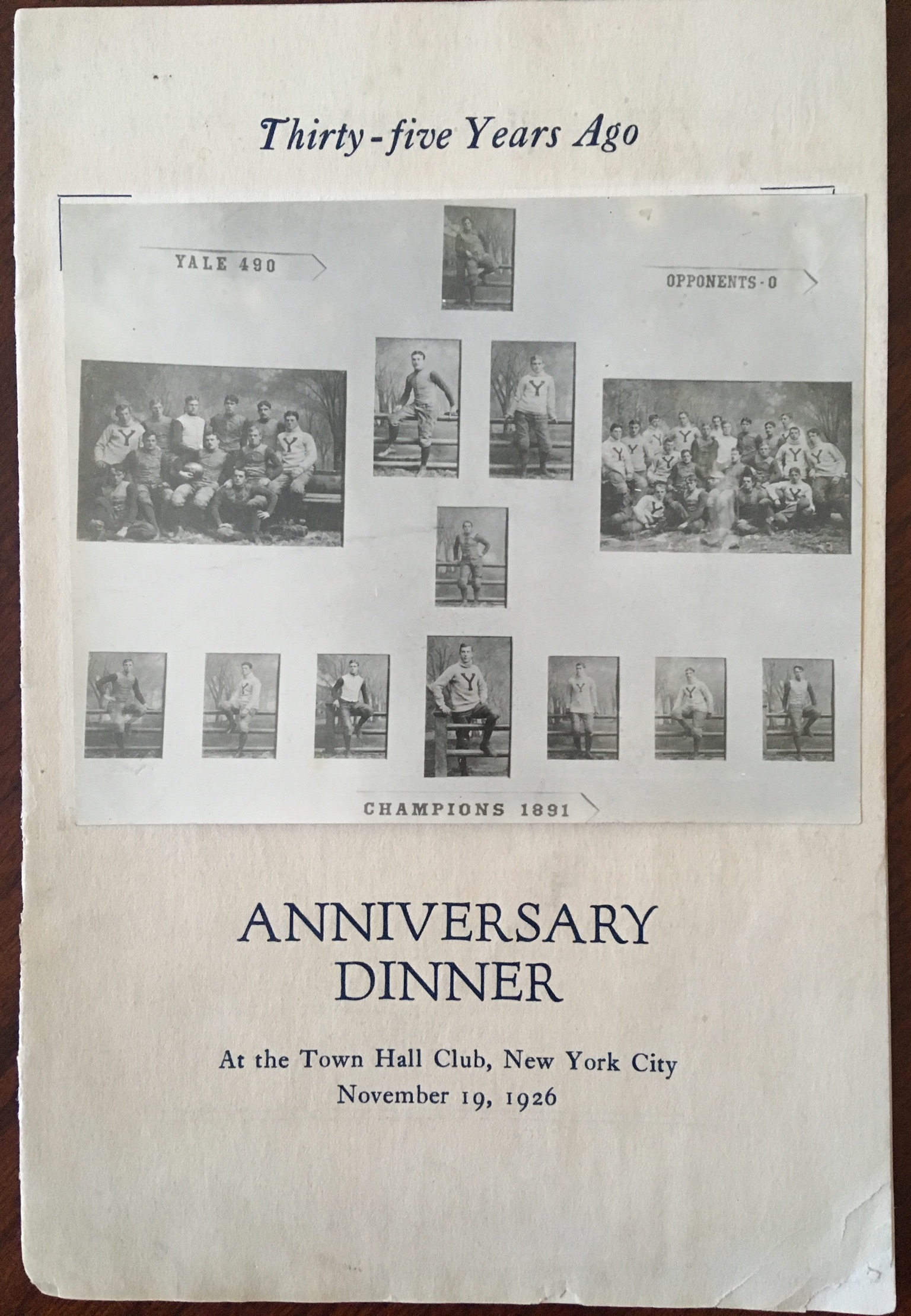