Below is a detailed description of the 1893 Yale vs Harvard football game in Hampden Park, Springfield Mass on November 25, 1893.  The article was printed that day in the Springfield Evening Union.  Key plays are highlighted for quick review.  Touchdowns back then were worth 4 points; successful kicks after goal were worth 2 points.

Yale appeared first on the field at 2:05, and the cheers rolled along the Yale stand from north to south in one great increasing volume.  Scarcely had the first round of the cheers been passed along, when from the opposite corner came the Harvard athletes running along passing the ball from one to another with the scars of many earlier contests expressed in bandages around heads and wrists.

They wore knickerbockers apparently of oilskin.  Only a few minutes were allowed for preliminary practice.  Yale won the toss, taking the north end of the field, giving Harvard the ball.  Harvard opened with a flying wedge gaining twenty-five yards.  Wrightington went through the center for two yards.  Adee of Yale was hurt in the play, but soon started in again.  Brewer pushed through the centre for three yards.  Wrightington was tackled by Hinkey and lost three yards.

Harvard gained four yards, through center, Brewer took the ball with no gain.  Three yards more went to the advantage of Harvard.  Cheering was continuous, short and snappy from Yale and longer from Harvard.  Harvard gains two yards more, but not enough that Yale secured the ball on four downs.  Butterworth immediately punted from their twenty-five yard line.  Harvard's ball again at midfield. 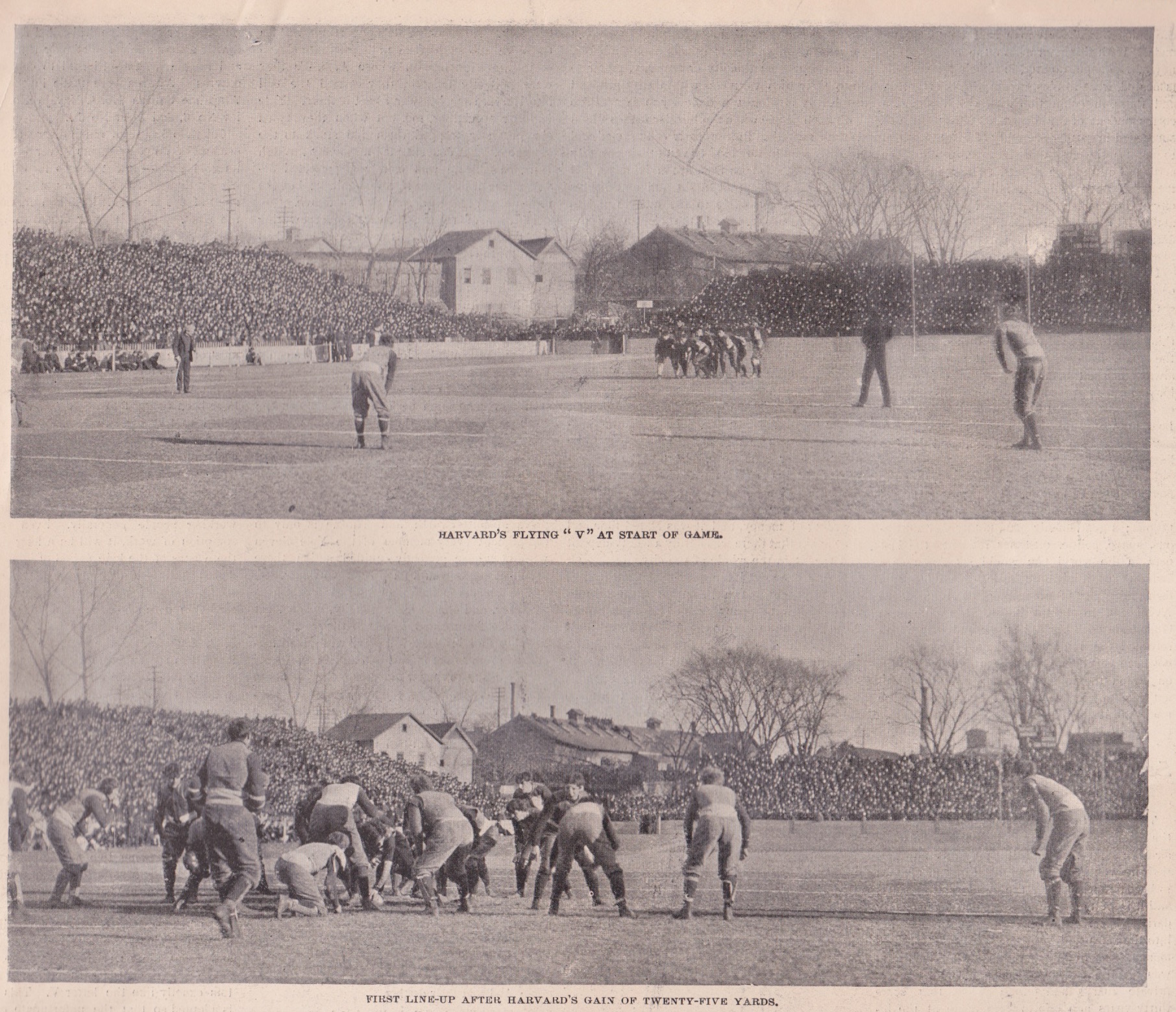 No gain on first attempt by Wrightington.  Two yards came to them by the flying wedge.  They were lost on the next plan and on four downs Yale had the ball back.  Brewer punted for twenty yards but bounded back to fifteen-yard line, with the ball.  Yale gained three yards.  Butterworth punted for thirty yards.  Waters rumbled and was tackled by Hinkey.  Waters punted in return only ten yards, and it was Yale's ball on Harvard's 15-yard line.  Two yards nearer the line Yale carried the ball, but on the next play Armstrong fumbled and Harvard secured the ball.  Again Waters punted for twenty yards.  Butterworth fumbled and Stephens fell on the ball for Harvard.

Harvard made three yards in a run around the right but later Brewer made no gain on an attempt through center.  Wrightington also failed to get around the left.  Another of his attempts failed but Harvard still held the ball.  The next play was made by Waters who got around the right for three yards and Brewer added two yards but stopped by going through the center.  Harvard then tried the trick of having the ball in the center and running around the end but failed.  Harvard now had five yards to get in (to make a first down).  Brewer punted to Yale's thirty-five yard line and Butterworth made a fair catch.  Butterworth immediately punted for third-five yards and Wrightington caught the sphere only to be downed by Greenway. 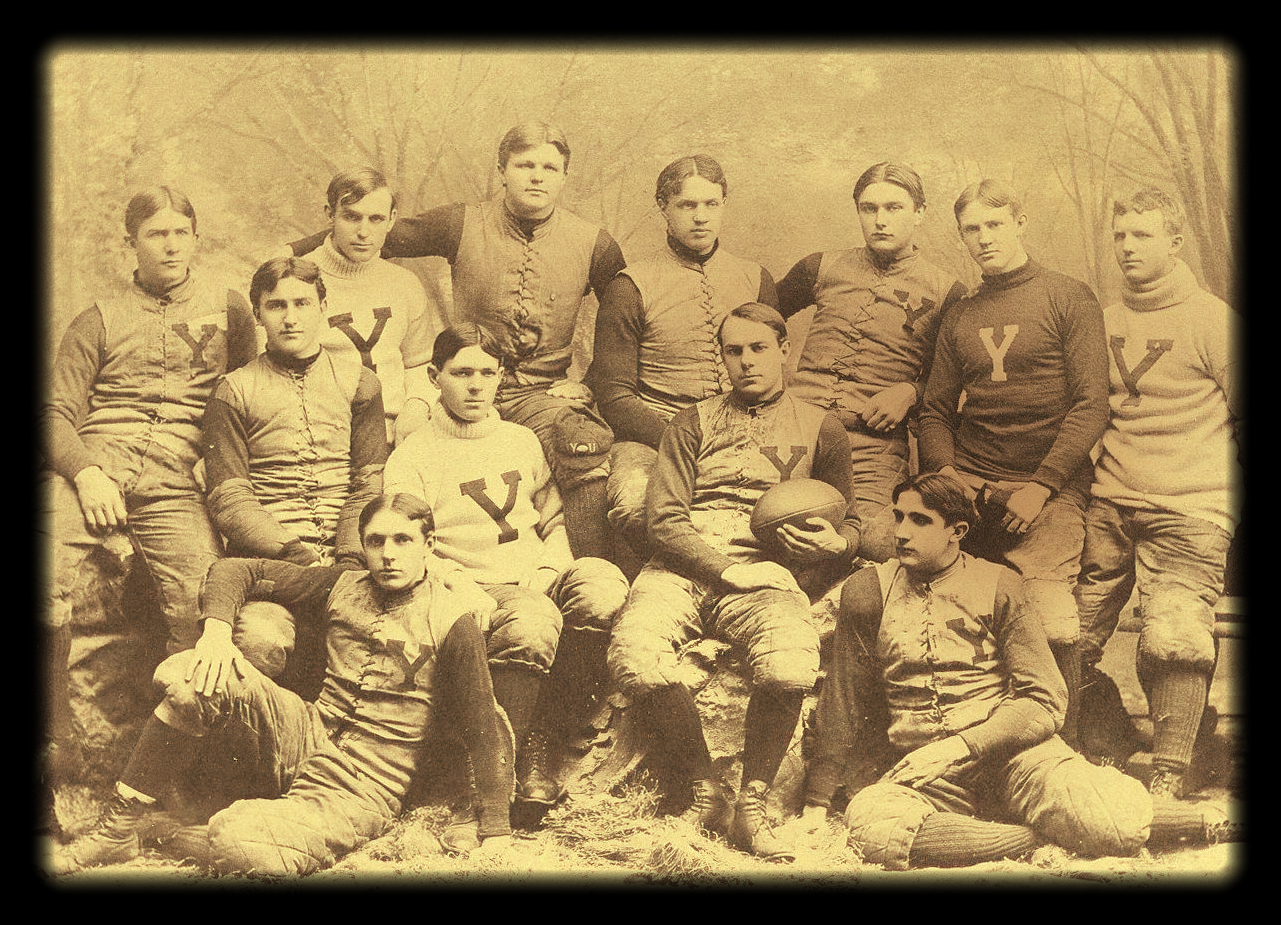 Ball is on Harvard's ten yard line.  Brewer then tried to get through the blue's center but failed.  He followed with a punt, and the ball went outside the ropes (out of bounds).   Greenway grabbed the ball and the men lined up on Harvard's 20-yard line.  Armstrong then added two yards to the Yale score by a break through the center.  Waters was hurt in the scrimmage by getting his tender knee in the middle of the fight.  A great shout went up as the injured man took his place in play.

Yale obstructed by making a gain of five yards around Harvard's right and lost the ball to Harvard.  The crimson tried around Yale's left but made little gain and after a second try had still three yards to gain.  They made it up, however, on the next play when they forced Brewer through the center to within one yard of the required distance.  Waters made this up by going through Yale's center but Wrightington lost this one and more by an attempt around the left end, courtesy of Frank Hinkey.

Yale now got the ball, but failed to make much by a rush through the center.  Yale was given five yards for Harvard's holding at this point, Yale then tried the flying wedge and gained one yard, but made nothing on a second try.  Butterworth tried for a goal from the field and missed by a hair, the ball dropping just beside the posts and captured by Harvard.

The sphere was then taken to Harvard's twenty yard line.  Harvard then tried the wedge, but Hickok jumped onto the top of the moving mass and helped to down the sphere.  Wrightington then fumbled, but Harvard managed to retain possession of the leather coated sphere. 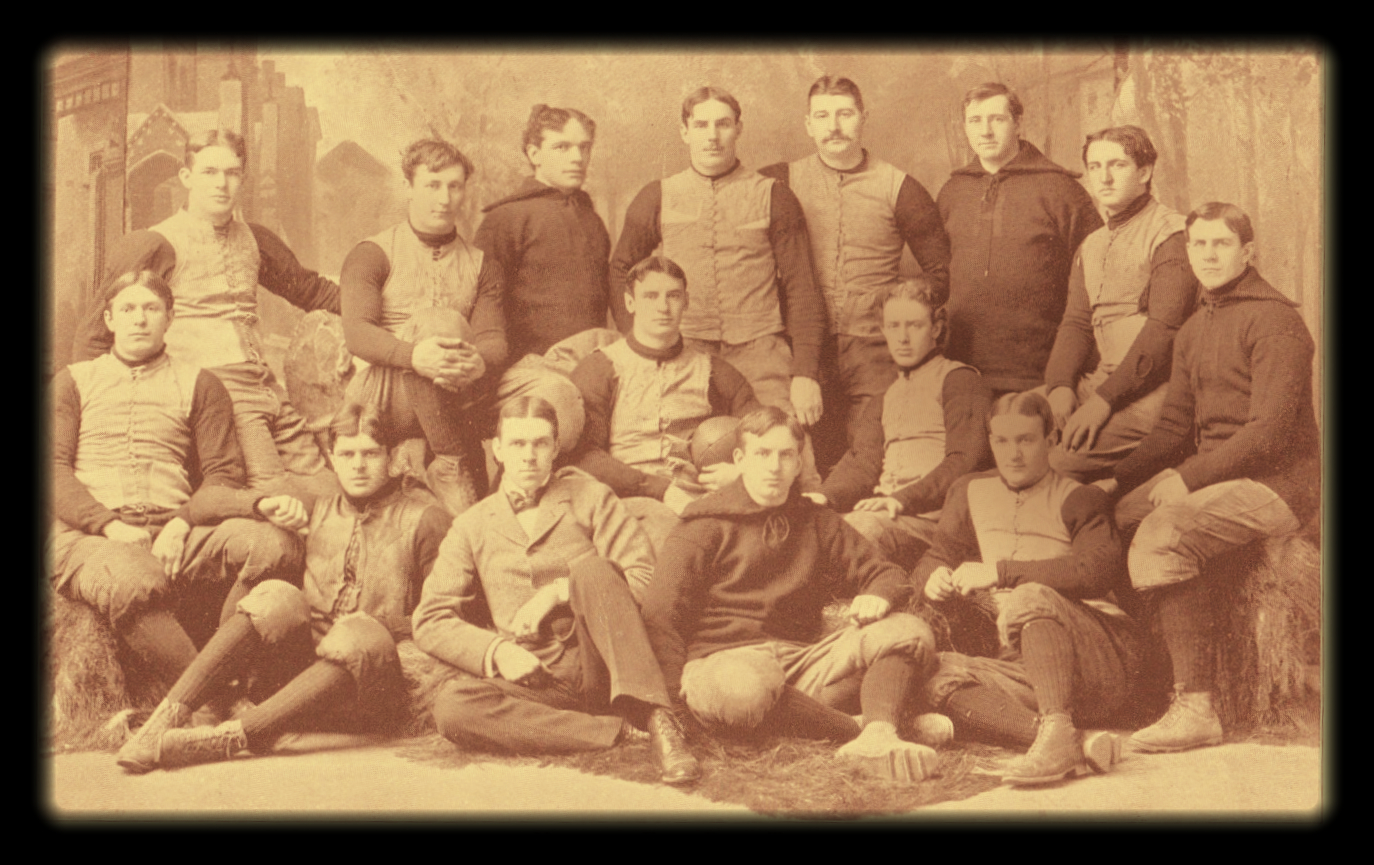 The wind was dying down near the end of the first half, although still strong enough to keep the ball in Harvard's territory.  Waters tries through center and loses two yards.  Brewer punts to thirty-give yard line and Hinkey makes fair catch.  Armstrong tries to run, Emmons breaks through and tackles him behind the line, and on a fumble, Harvard gets the ball - Brewer through center for an additional five yards.  Greenway secured the ball and ran with it behind Harvard's goal post on a subsequent fumble, but it was not allowed on account of off-side play.

Harvard's ball still.  Running wedge with Wrightington in possession of the ball gave no gain.  Waters ran around Yale's right end for seven yards.  Wedge through center gives two yards more.  Another wedge for three additional yards of precious ground.  Two yards more around right end.  Wrightington for three yards.  Second down for Harvard.  The flying wedge makes three yards and brings ball to Yale's 30-yard line.  Brewer went through center for two yards, enough to keep the ball.  No gain on the first attempt.  Harvard gets five yards for off-side play by Yale .  It is now 3:09 o'clock.

Wrightington pushed through the center for eight yards.   Yale held the wedge that came next, and there was no gain.  Harvard's hopes were very high as the continued cheering showed.  Then came a ringing shout for Yale for on a fumble by Brewer, Greenway got the ball for Yale.  Butterworth punted for twenty five yards, but Harvard was given ten yards for holding.  Harvard gained four yards around Hinkey's end.

The flying wedge was again stopped with no gain.  The ball was on Yale's 30-yard line.  Another attempt around Hinkey's territory gave no gain. Harvard was again stopped on an attempt through the center, and Yale got the ball on four downs.  Butterworth punted to Harvard's twenty yard line, but Brewer caught it and recovered five yards, only to be thrown by Greenway.  Harvard then made two attempts through the center, but only gained three yards.  Time was then called, the time being 3:15, and the men ran off the field. 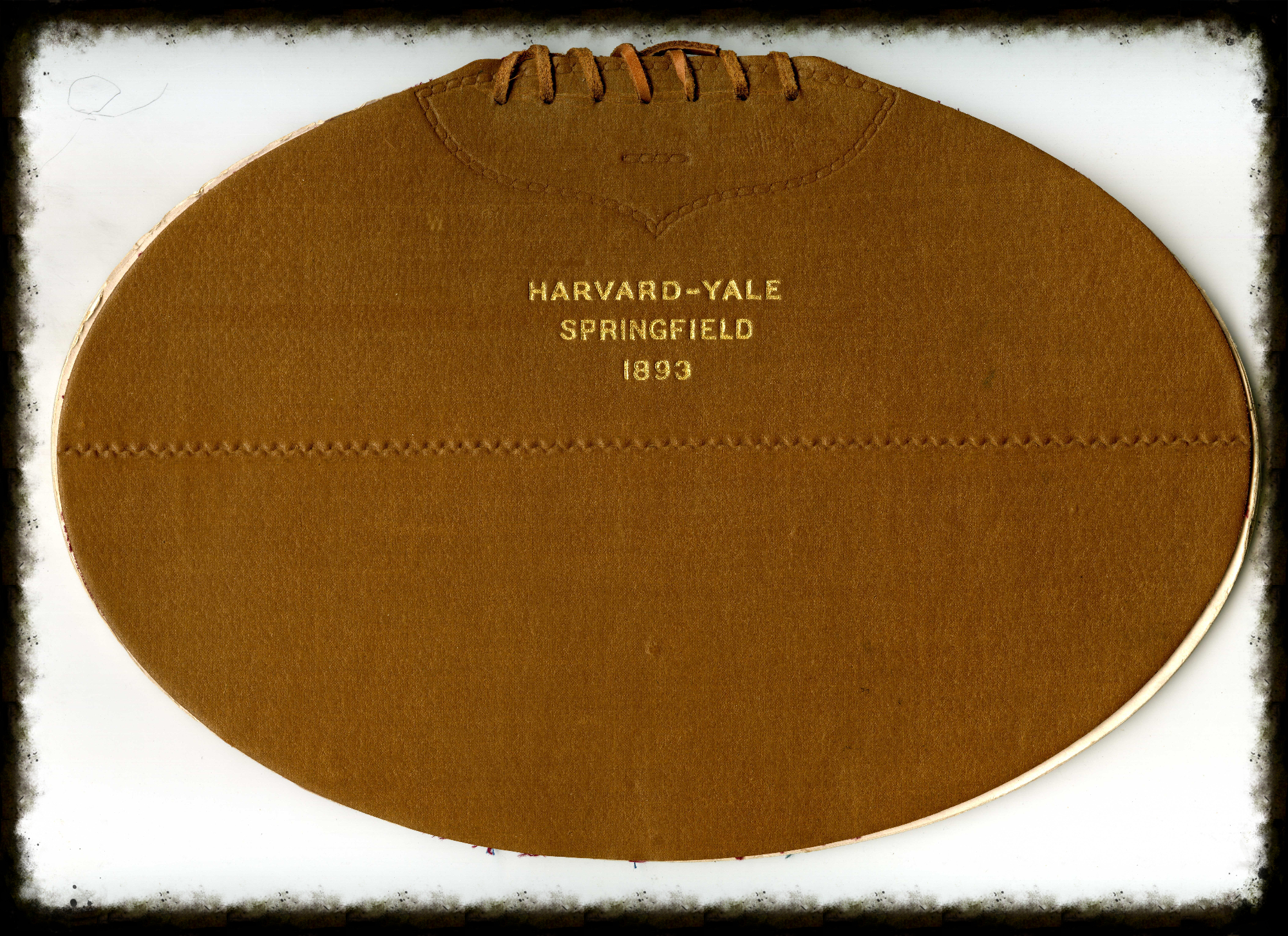 The second half opened at 3:30 with the ball in Yale's possession.

Yale rushed and Thorne got around the end for seven yards, to which Armstrong added another ten yards.  Armstrong again around to the left for six yards and distinguished himself by putting another four yards to it.  Butterworth then carried it to Harvard's twenty yard line and later made fifteen yards through Harvard's center.  Yale made another gain of two yards and carried the ball to the crimson fifteen yard line.  Anther yard was quickly added.  Butterworth then got through the center for another gain, and the ball was placed in dangerous proximity to Harvard's goal line. Butterworth then got though the center for a touchdown.  Hickok kicked a goal.  Sore, Yale 6; Harvard 0.

Butterworth for two yards.  Thorne for one yard.  No gain.  Butterworth again for two  yards making the first down.  No gain on the next play.  Harvard was holding well.  Harvard's ball.  Four yards to Harvard's credit.  Another small gain.  Ball on twenty yard line. Waters hurt again.

He was up again soon.  Wrightington ran for twenty yards.  Brewer around Yale's eight end for ten yards, but slipped and fell.  Harvard lost three yards.  Six yards to gain.  Harvard received five yards for off-side play.  The ball was now about midfield.  Another flying wedge gave Harvard a small gain which was found by another gain.  Second down , two yards to gain.  Thorne got hurt and the men rested for a bit.  Waters gained a yard but the Harvard men lost four yards on the next play.  Yale got the ball on four downs to close out the game. 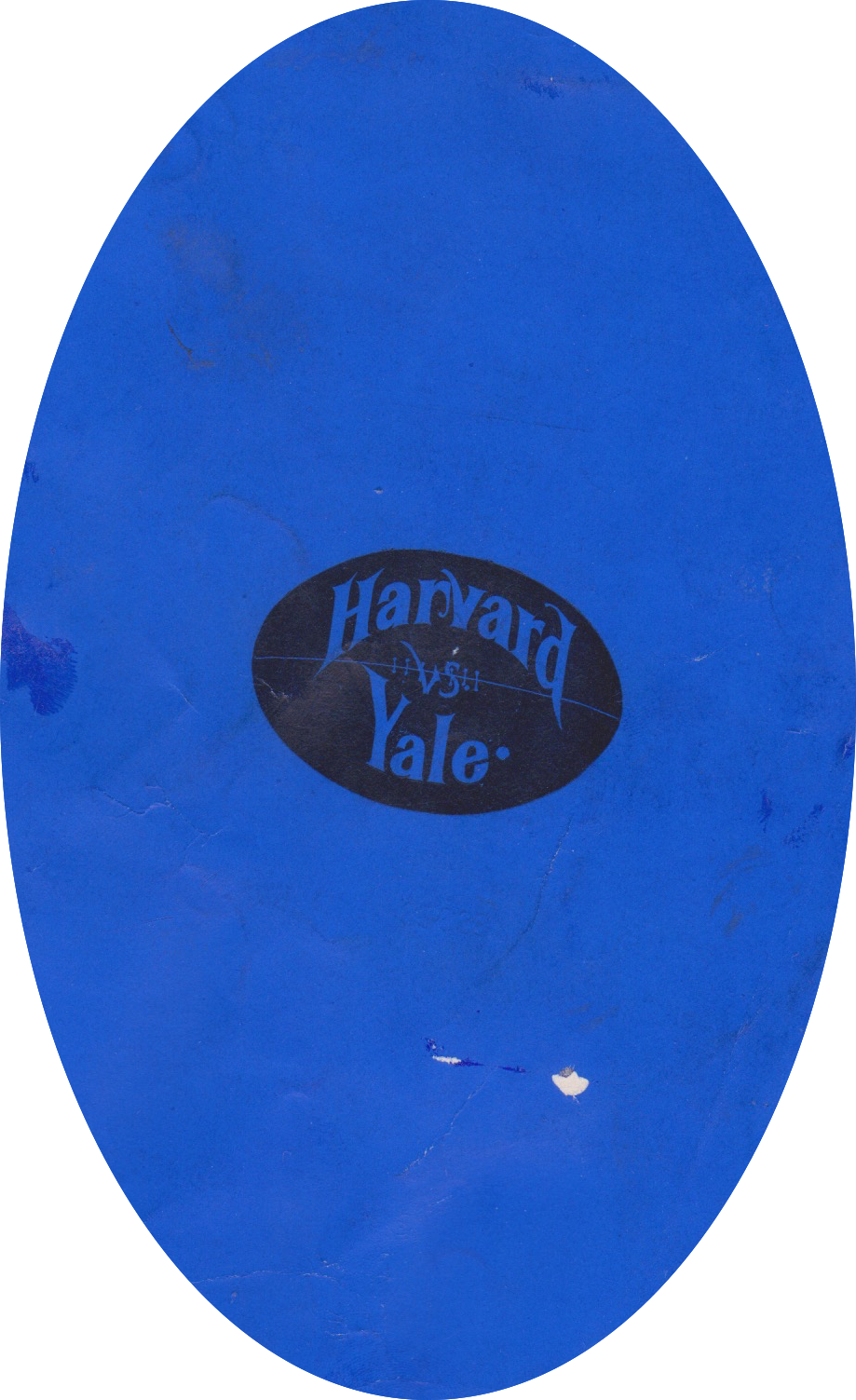