Below is a detailed account of the Yale vs Princeton Football game on December 1, 1894 at Manhattan Field in New York City.  This article was published in the Sporting Life the following week. 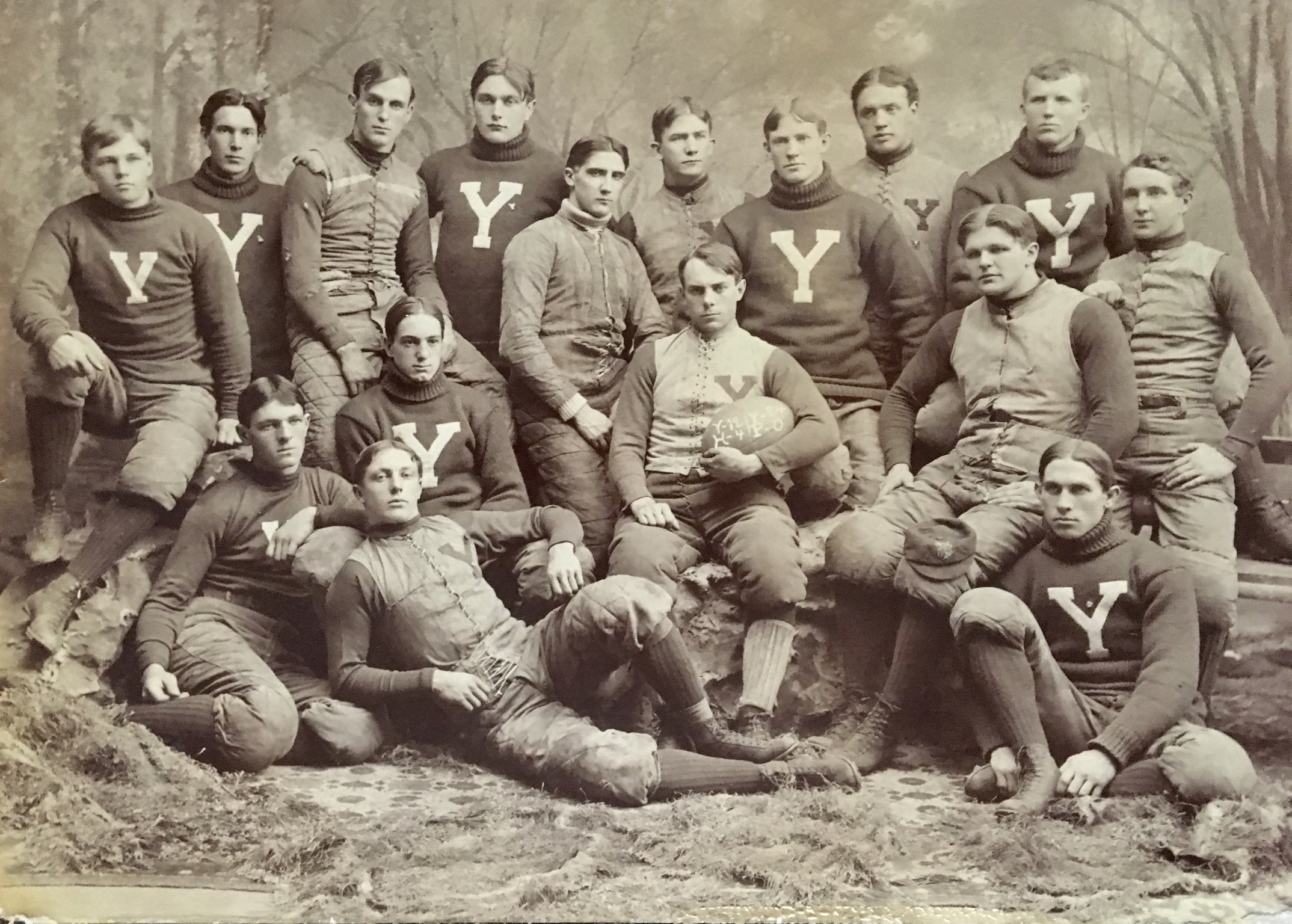 YALE ALSO WINS.  Princeton Easily Beaten in the Rain by 24 to O.

Yale won the annual football game from Princeton December 1, at Man­hattan Field, by four touchdowns and four goals to nothing.   As a scientific exhibition the game was not up to the usual standard of play exhibited by the big colleges. Much of the bad work can be attributed to the wet condition of the grounds, and the fact that it was extremely hard to hold the ball. There was a gratifying absence of slugging or brutality, and the 18,000 spectators who saw the game had nothing worse to complain of than the miserable weather. The game was played from start to finish without a display of temper or a show of blood.

Princeton lost the game through the very inferior work of her backs. Time after time the Yale forwards broke through the Tiger's line and blocked Kicks. The punts of Butterworth, the Yale full back, were for the most part long and well judged. It was seldom, however, that they were handled in any­thing like 'Varsity form’ by the Princeton backs. Fumbles were frequent and costly behind the Princeton line, one fumble in particular giving Yale the only touchdown made in the second half. When asked after the game if his team would play Pennsylvania, Cap­tain Hinkey said: "No! Most decidedly not. There are many questions to be settled before we can play them." The football season ended, therefore, with this game, details of which are append­ed:

THE CONTEST. Yale Shows Superiority From Start to Finish.

It was just 2.08 o'clock when the men faced each other. Yale won the toss and Princeton took the ball. Inspector Conlin gave the men a short talk before they began, saying that he expected they would refrain from any rough playing. 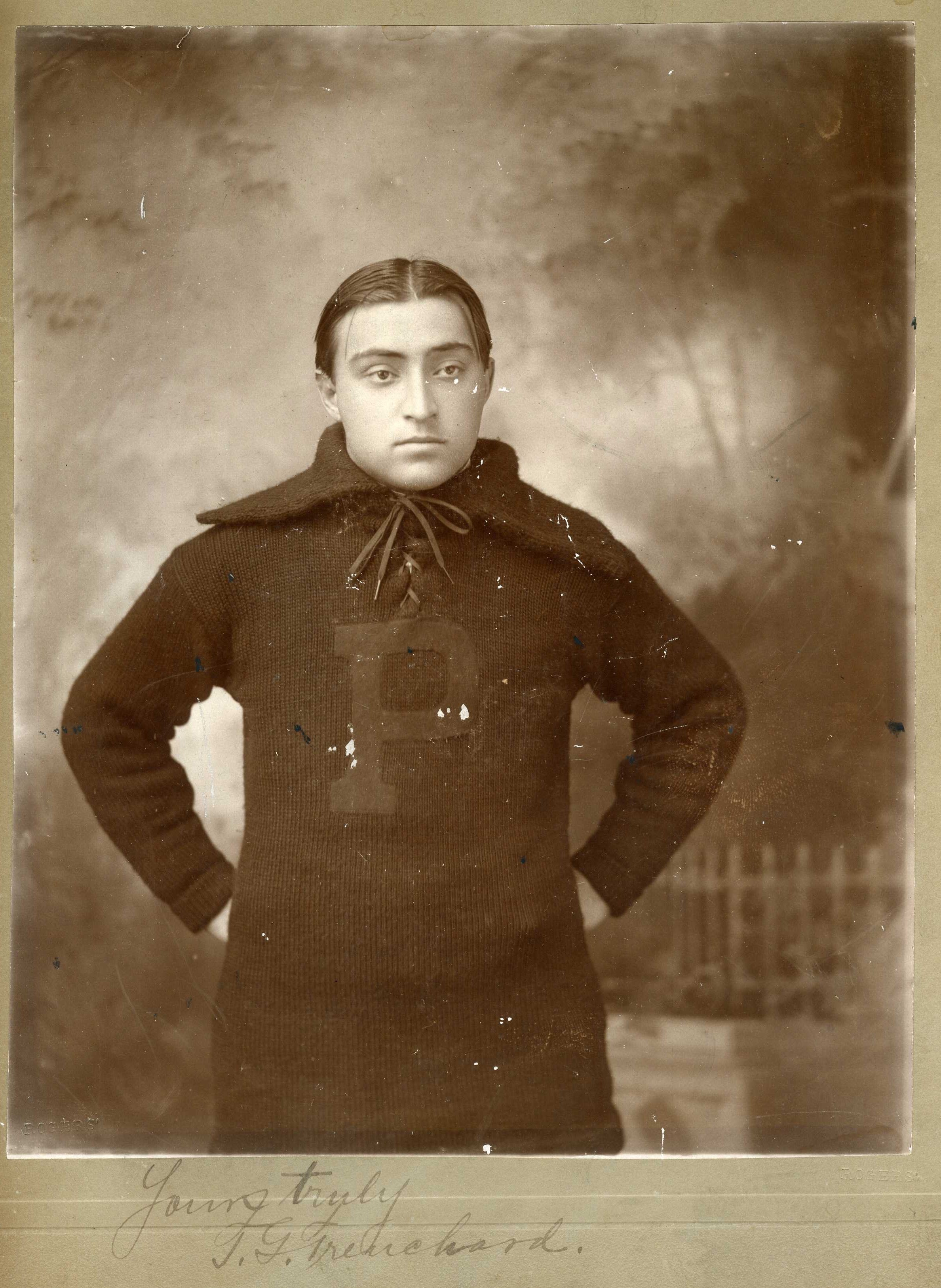 Yale tried the centre, no gain. Thorne tried left, gaining five yards. Butterworth made five around Princeton's right. The ball was now on Princeton's 15-yard line. Thorne was pushed through the centre for three yards. Jerrems made three around right end. Both teams fought like tigers on Princeton’s 10- yard line.

Yale worked the centre on the third down for live yards and on the second play of the same character fired the ball over the line, Butterworth making the touchdown. Hickok kicked the goal. Score:  Yale, 12; Princeton, 0.

On the next line-up Princeton kicked off to Yale's 15-yard line and Barnett, breaking through, downed Butterworth before he could make any return gain. Butterworth punted to the centre and Cochran carried it back to Yale's 45-yard line. Rosengarten was put through Yale's centre for three yards, and made six more through right. He again tried Yale's right, gaining two yards. Barnett tried Yale's centre, gaining one yard; then Rosengarten was put through for two more yards. Princeton was playing desperately, while Yale was letting up a trifle. Yale's ball. Butterworth punt­ed poorly to Princeton's 45-yard line. Rosengarten muffed the ball, Yale cap­tured it.

Jerrems went through Princeton's cen­tre for two yards. Butterworth tried the centre, but made no gain. Yale's ball. Barnett tried Yale's right, gaining two yards. Rosengarten fumbled and Yale captured the ball, Princeton losing a yard. Yale tried the centre twice without any gains. Thorne wont through Princeton's left for four yards. Princeton's ball. Cochran punted to the centre and Rosengarten tackled Butterworth before he could gain. Butter­worth punted to Yale's 35-yard line and the ball going out of bounds. Princeton’s ball. 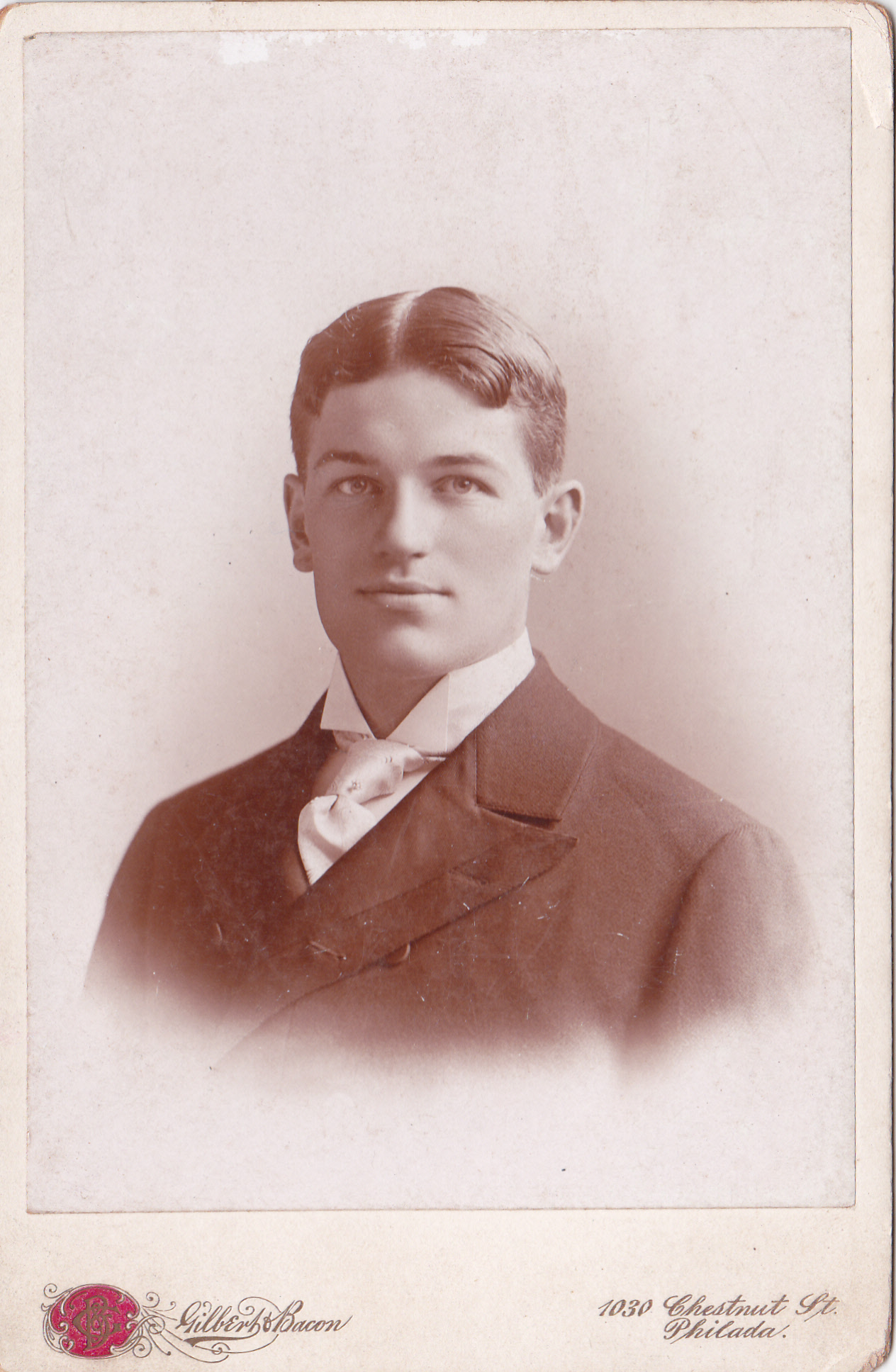 By sheer force of mass plays Jerrems was pushed through for 10 yards, and Thorne for two more. It was Yale's ball on Princeton's 15-yard line. Yale was continually massing on Princeton's right tackle, and found a pregnable point there. On three downs Yale gained five yards by this play. Princeton fought hard to keep Yale from making a touchdown before time was called on Princeton's 10-yard line. Score Yale, 18; Princeton, 0. 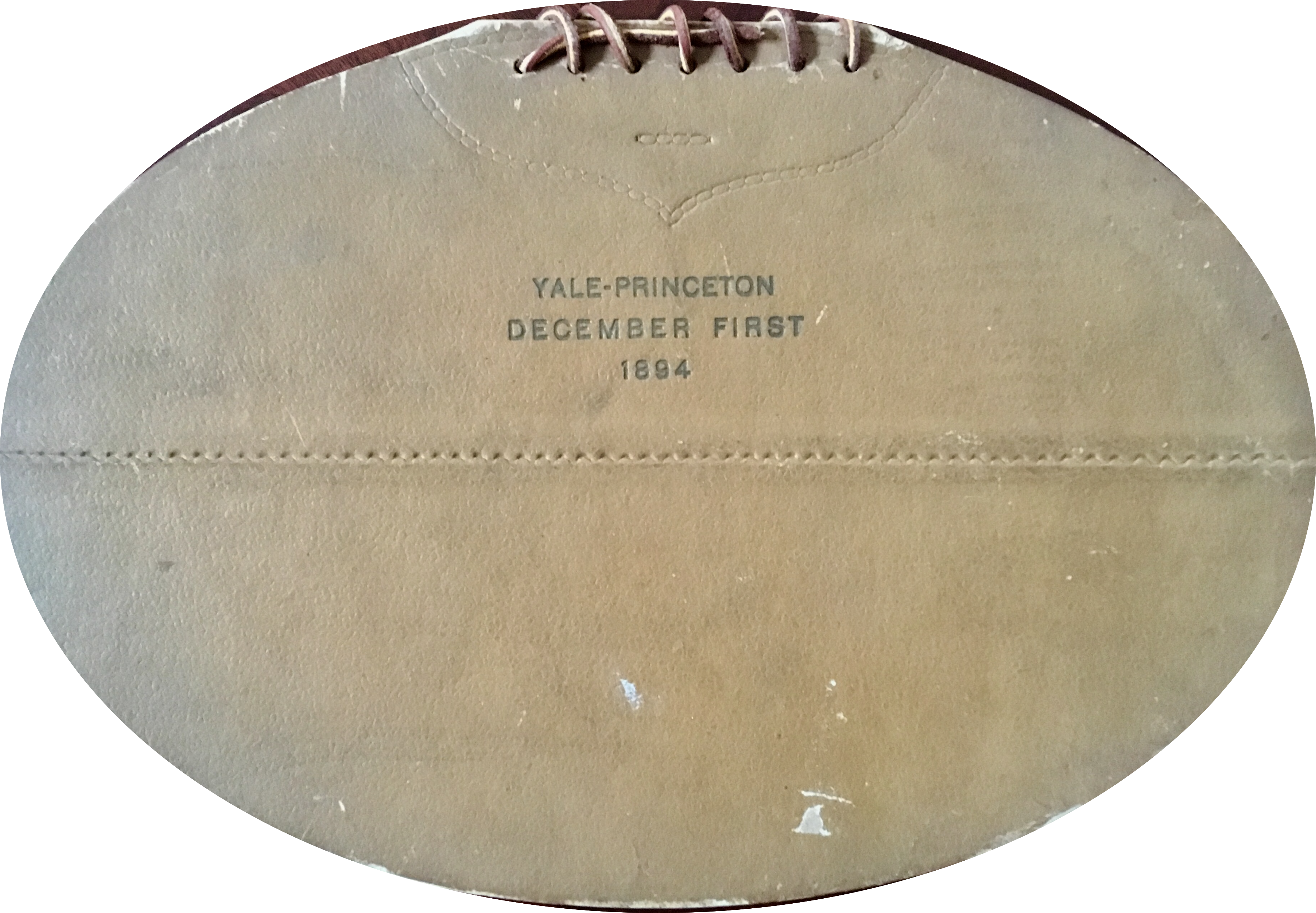 At the beginning of the second half Yale kicked to Princeton's 25 yard line. Poe captured the ball. Rosengarten went through Yale's centre for three yards, and then made two more through left. Yale got the ball on three downs and twice failed to make any gain. On the third down Thorne gained the requisite five yards by bucking Princeton's right. Then Yale began her mass plays on Princeton's right tackle. Adee was hurt in this tussle, but soon re­covered. Butterworth, by a pretty in­terference, went around Princeton’s left for 10 yards. It was Yale’s ball on Princeton's 15-yard line. Three times Yale tried Princeton's centre, but was repulsed. Princeton's ball. Ban­nard tried to punt, but only put the ball 10 yards. Trenchard got through, however, and downed Butterworth be­fore he could return.

Princeton's ball on 35-yard line. By trying Yale's left end they made two yards. Taylor got through Yale's cen­tre for three yards and Thorne was hurt in the scrimmage. Letton took his place. Princeton's ball on her own 35-yard line. Bannard punted to Yale's 35-yard line and Rosengarten broke through, stopping a return. Yale’s ball. Yale punted and Bannard got it on Princeton's 30-yard line. Princeton’s ball. Princeton twice tried Yale's cen­tre, but it only resulted in a loss of three yards. Then Bannard punted for 30 yards. Butterworth caught it, but dropped it when tackled by Poe. Yale, however, secured the ball, but on the next down, although Yale gained five yards, she lost the ball. 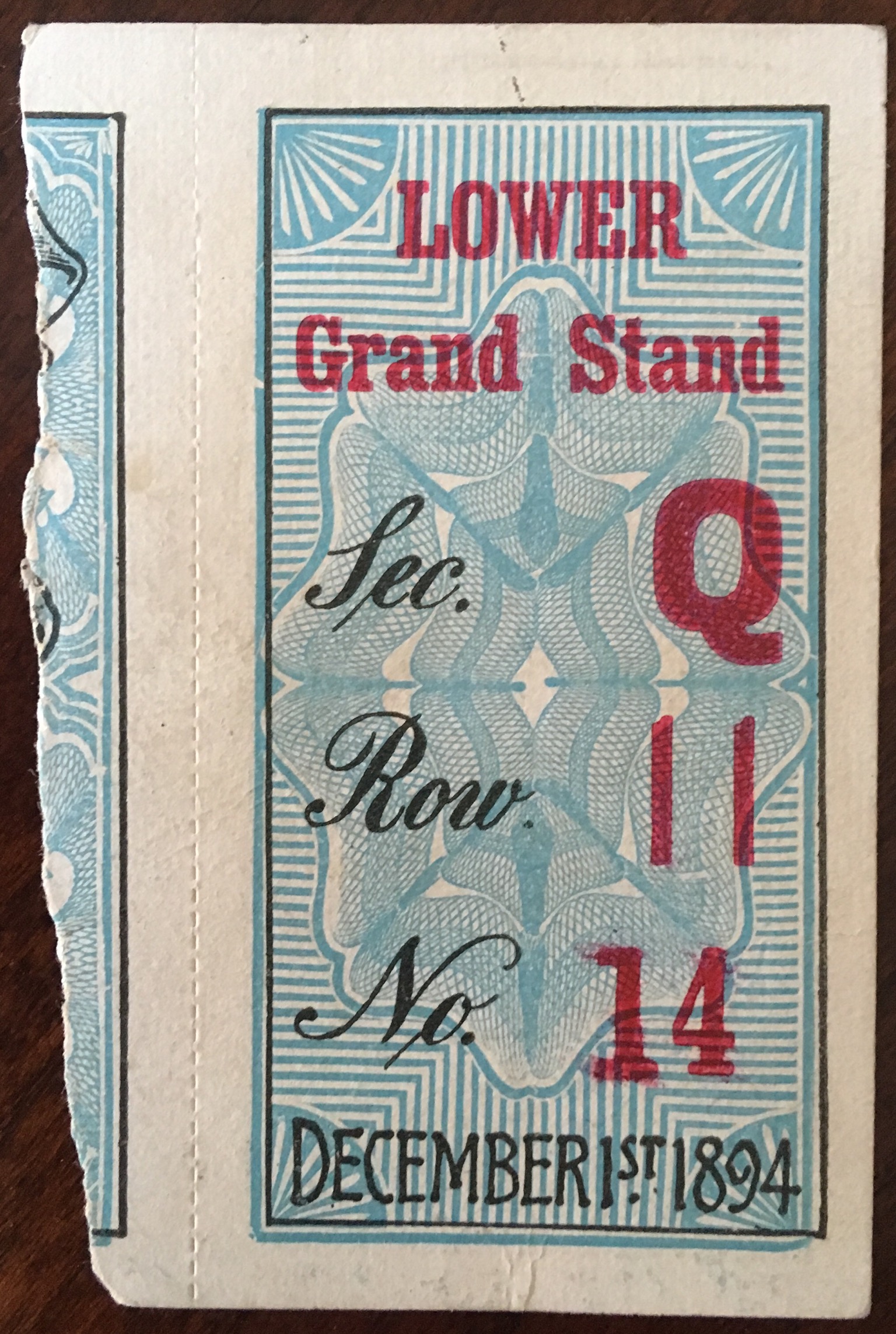 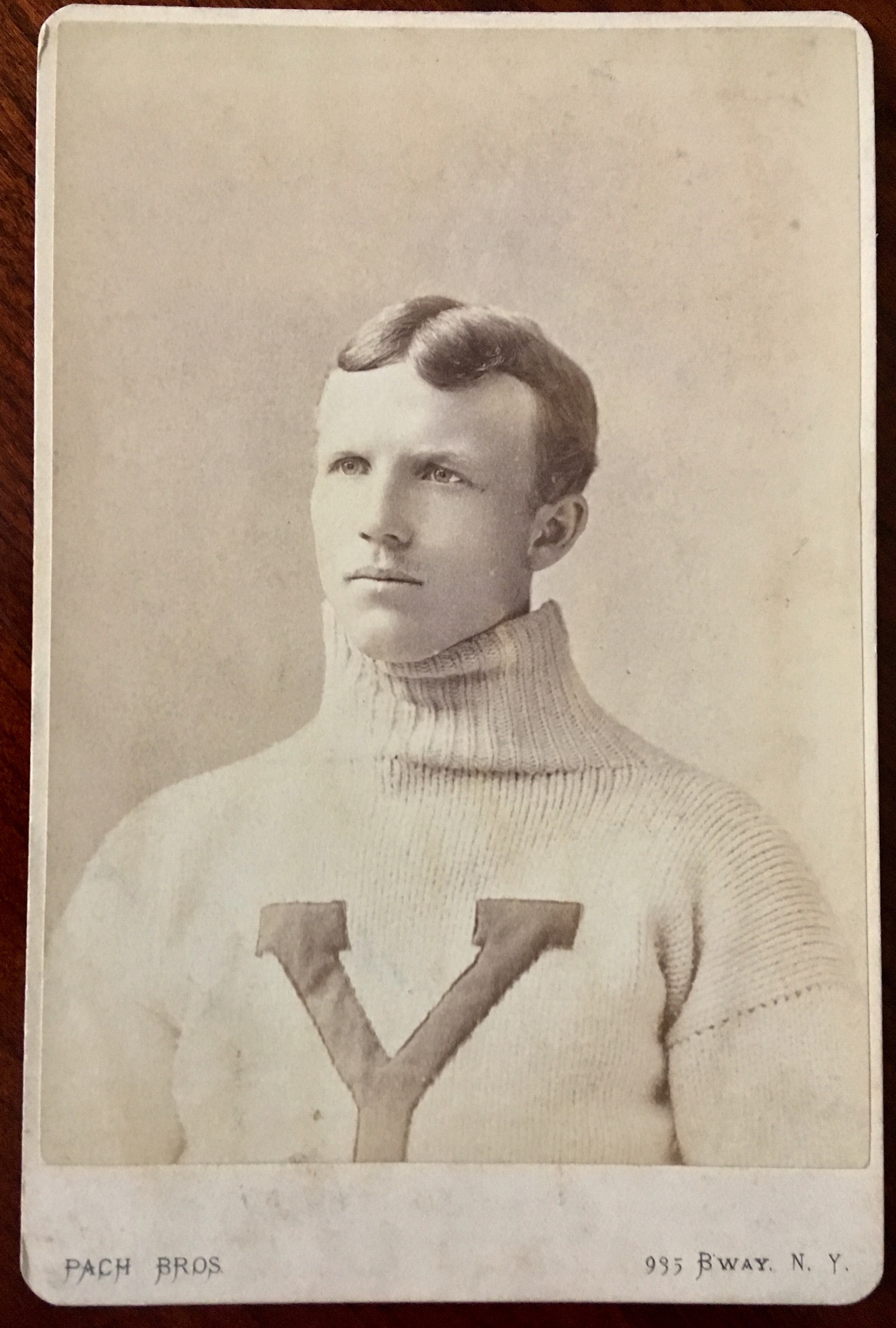 On the next line-up Bannard punted to Yale's 20-yard line. Yale's ball. Brown was injured and there was a delay of three minutes. Butterworth punted and F. Hinkey downed Bannard before he could regain two yards. The ball was Princeton's on the centre. Poe was tried on the centre, but made no gain. Bannard punted for 20 yards and the ball was Yale's on her 40-yard line. Butterworth punted to Princeton's 30-yard line and Bannard downed the ball without regaining. There was a general lack of brilliancy on both sides. Yale's ball, and they dribbled in through the line, Princeton getting the ball. Ban­nard punted to Princeton's 35 yard line. Yale's ball.

On three downs Yale failed to get in, and on the fourth lost the ball to Princeton. Bannard punted for 40 yards, but the punt was low, and Trenchard miss­ing Butterworth regained eight yards. Yale's ball, on Princeton's 50-yard Hue. Barnett went on at this point in place of Rosengarten. The men struggled mightily, Yale losing two yards by Tay­lor breaking through. Then Butterworth punting to Princeton's 15-yard line. Princeton's ball. Poe fumbled, and F. Hinkey broke through and carried the ball to Princeton's line, not carrying it quite over.

Bannard punted to Princeton's 30-yard line and Yale got the ball. Yale tried her centre massing, but the Princeton men fought hard to keep them from gaining. Yale's mass wedge was used against Princeton's right with terrific force, but the men stood it bravely and the gains were small, and the game ended with the ball on Princeton's 10-yard line. Score Yale, 24; Princeton,0. 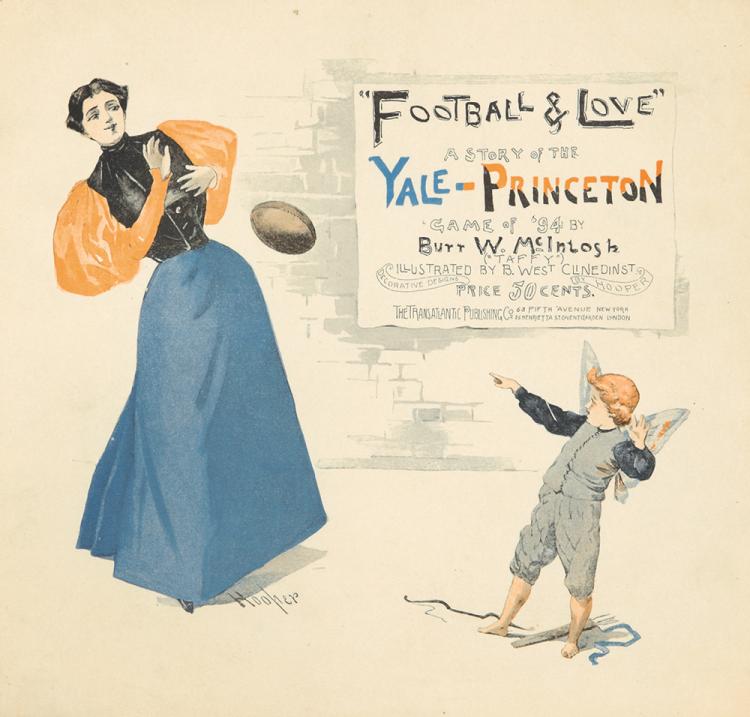