Below is a detailed description of the Phillips Andover versus Phillips Exeter football game on November 8, 1890.  This article was published in The Phillipian, the Andover weekly newspaper.  Therefore the reporting is a bit biased. 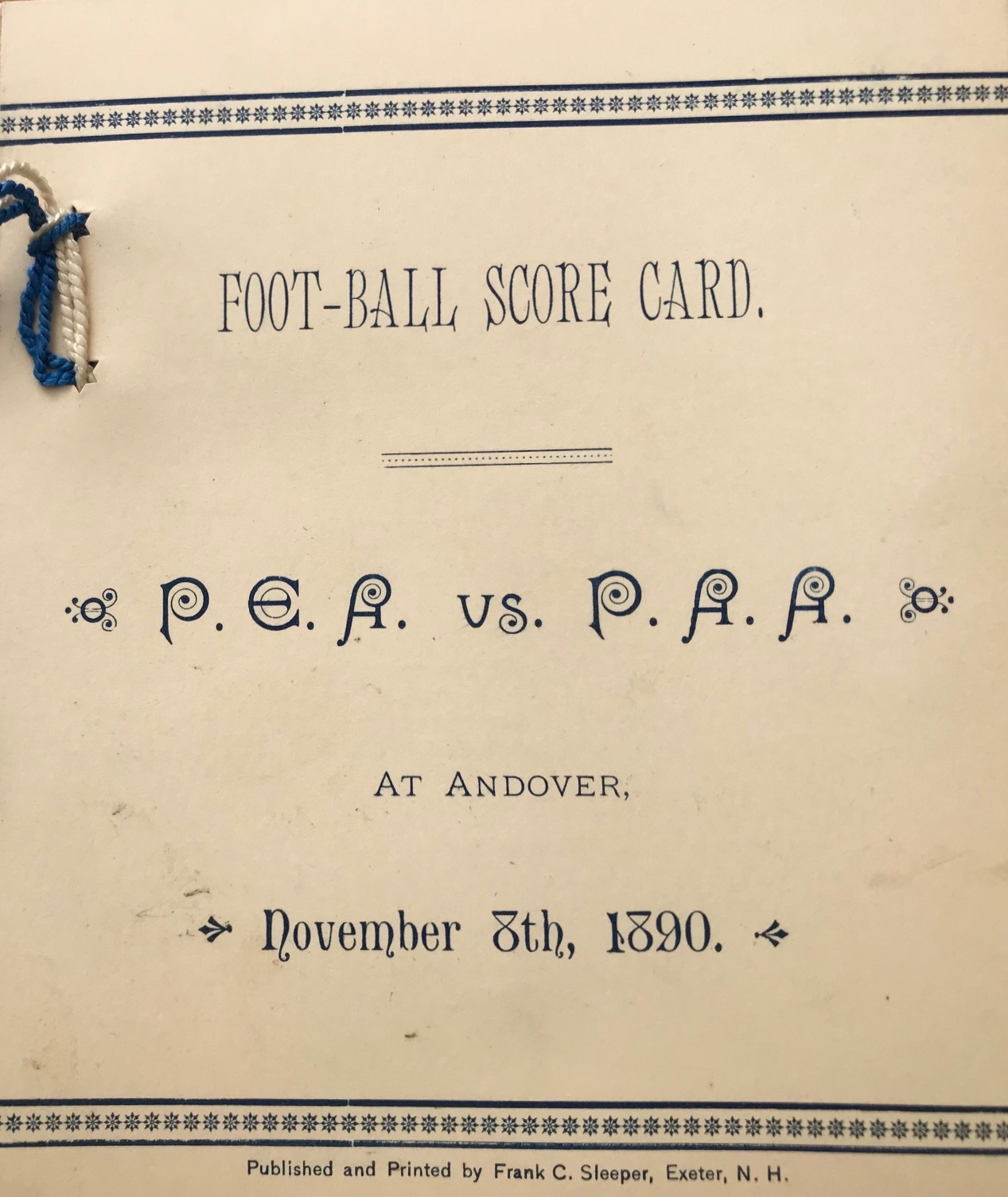 At 2:45 referee Carpenter called time, and the great game began.  Cox gained ten yards with the help of a V. Messrs, Woodruff, Colt, Hopkins, and Townsend added four yards each, and then Hopkins made a fine dash of twelve yards around right end.  Hinkey advanced five yards when Knapp touched her down, but he was not satisfied until he had kicked the goal.  Score 6-0. Time, 5 minutes.  Exeter could not work the V at centre, and lost ground. Andover’s ball on four downs, the referee said, and Woodruff went around right end for twenty-five yards before Exeter could stop him.  But alas, Exeter gets the ball on interference.  Haradon gains ten yards, but suddenly the Exeter boys stop.  Townsend and Taylor are right there.  Andover get the pigskin on four downs, but it goes back, on a fumble by Sheffield.  Grouard plugs through the centre for five yards, but then Phelan has to kick. Knapp rushes eight yards, Woodruff and Hinkey nine together, and then “Hoppie” crawls ten yards after falling down. 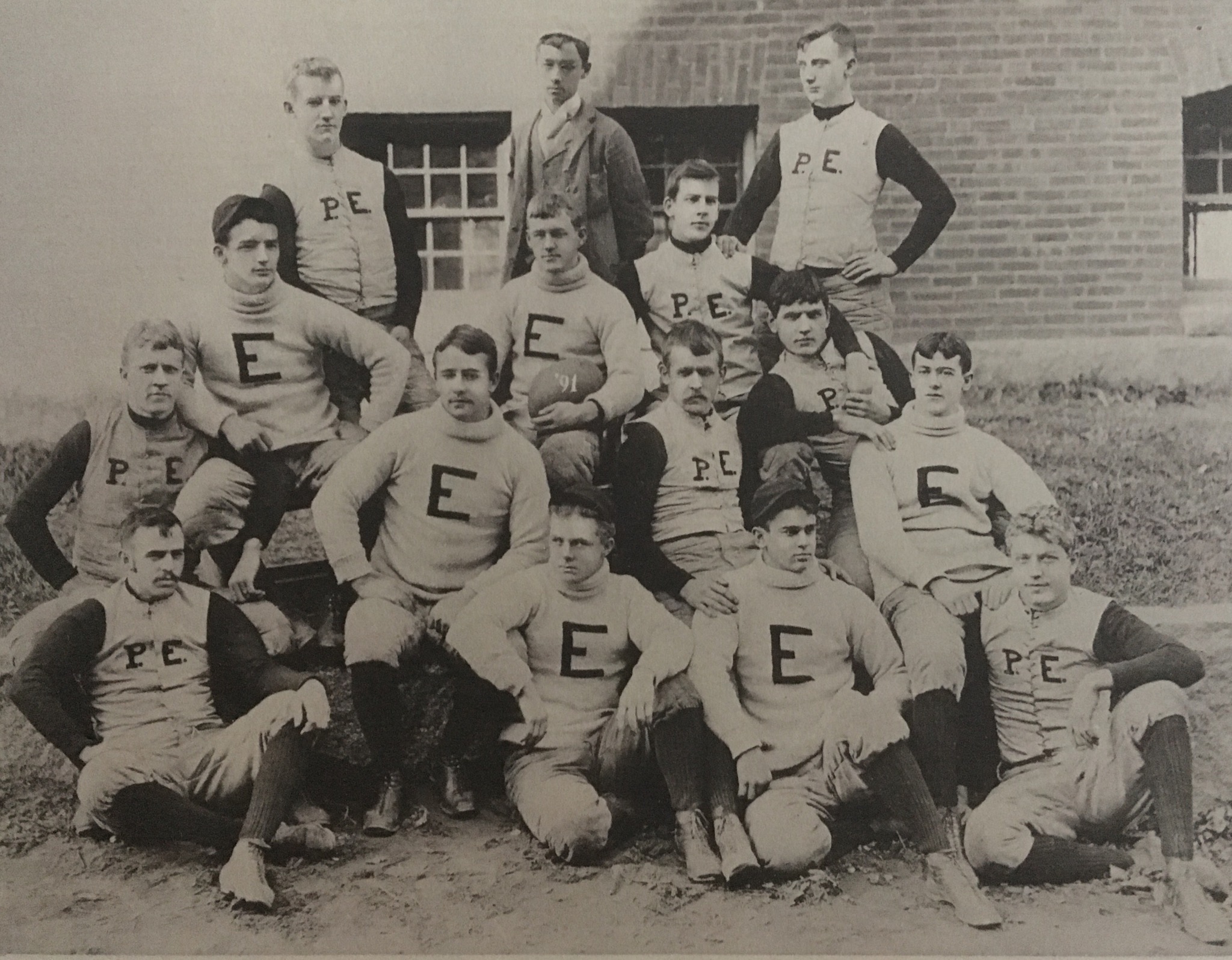 Andover is offside at this point, but Sheffield makes up for it by tackling Phelan at a loss of ten yards.  Capt. Phelan then kicks, and “Hink” finding the ball, moves back four yards.  Woodruff and Knapp make good rushes, but Andover gets offside, and Exeter has it.  Sheffield again tackles at a loss, and Mr. Phelan has to punt to Knapp, who drops on it. Woodruff and Knapp rush twelve yards, and then Hopkins makes a dandy run of eighteen yards around the end.  Exeter now gets the ball on a fumble.  Cox allows no one to pass him, and again Phelan has to punt as the only way to gain.  Knapp soon kicks, and Hinkey assists Woodruff to drop on the ball by a good tackle.  Exeter now braces, and forces fourth down upon Andover.  Phelan fools us on the criss-cross, and rushes fifteen yards. Ogilvie and Townsend get in their work, and the New Hampshire boys again kick.  On lining up, Knapp makes a brilliant rush of thirty yards through the whole Exeter team.  Townsend and Colt add thirteen, and Woodruff sprints twenty yards with no one to stop him. Hinkey and Taylor add four yards each, only to have the ball go to Exeter.  Cox and Hinkey get in their work, and we hear the joyful sound “Andover’s ball”, but strange to say we cannot advance and Exeter in turn failing to do so, Phelan kicks to Knapp at centre.  Hopkins starts off for a thirty yard run.  Exeter, however, gets the ball for interference, but to no purpose. Andover takes the ball, and failing to advance, owing to a fumble, Knapp tries what is called a drop kick, but misses his mark by four inches.  The ball bounds back from the cross-bar into Townsend’s arms, which are ever ready to embrace it.  He plunges through the Exeter men, and makes a touchdown.   Knapp’s foot is pretty small, but it tips the ball again for a goal, and Andover yells 12-0. Time, about thirty minutes. 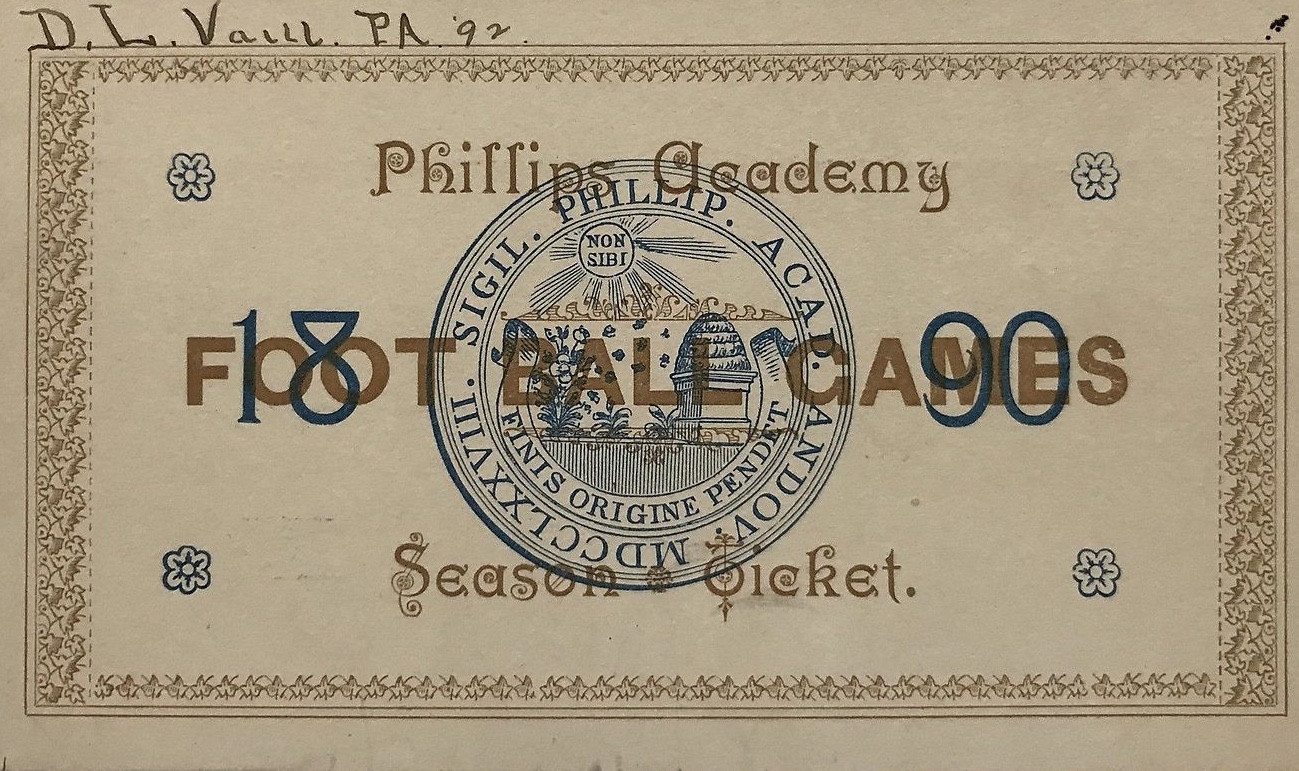 At the centre Exeter only made five yards with her V.  Phelan then politely fumbles the ball, and Andover has it on four downs.  We are unable to keep it, however, and Leavitt taking it advances five yards when Haradon is ruled off for continually punching Townsend.  James takes his place.  Knapp celebrates this new arrival by plowing through his side for twenty-five yards.  Hinkey rushes ten yards, and Taylor and Colt six each, when Exeter gets the ball for offside play.  Hopkins does not allow Maxwell to gain.  Irvine then makes 5 yards, when Phelan again tries the criss-cross and makes 20 yards. Grouard adds his mite of 5 yards just at this time.  Hopkins and Sheffield are on hand and tackle well.  Exeter gest over anxious and so gives us the ball for being offside. Woodruff, Knapp, and Colt gain 14 yards only to let Exeter have the ball on a fumble. Taylor tackles Phelan in great shape, compelling him to kick.  Knapp and Hopkins make short rushes, when time is called, leaving the ball near the centre.  Score: Andover 12; Exeter 0.

When the half closed, Exeter’s faint hopes were nearly all gone and they soon saw they were not in the game.  Exeter takes the ball and with a V, Phelan makes 5 yards, being tackled by Townsend.  Maxwell gains six yards around the end, when Phelan has to kick and Sheffield gets the ball. Leavitt tackles Hopkins well, after he has rushed 30 yards around right end.  Knapp is unable to kick, as Exeter breaks through, so Andover gives up the ball. Phelan rushes six yards, but that is all.  Woodruff and Ogilvie consider that enough.  “Old Hink” then takes the ball, and by a peculiar snake-like movement, advances twenty yards.  Exeter becomes generous, and gives us 5 yards; then Woodruff and Hopkins each advance ten yards.  “Hoppie” next dodges through the centre, and by a fine rush touches down the hogskin behind the posts.  Knapp for once fails at goal.  Time from beginning play, eight minutes.  Grouard and Maxwell together gain ten yards, from the 25-yard line.  Phelan, however, soon has to kick and Exeter gets the ball. Grouard makes a good rush of 15 yards, and another of 5 through the centre.  Leavitt and Maxwell each add 4, but then Andover wakes up and Hinkey starts off by tackling Phelan 10 yards back.  Phelan has to kick to Sheffield, who rushes 5 yards.  Sheffield fumbles, but drops on the ball, and then Knapp rushes 8 and Hopkins 6 yards, when Exeter gets the ball on another fumble.  Phelan rushes well for twenty yards and Leavitt 4. Cox then tackles Grouard behind the line, and Phelan has to kick.  Exeter gest the ball out of bounds, and Grouard makes a good rush of 25 yards, being finally tackled by Taylor.  Andover gets the ball for offside play, and Woodruff advances 3 yards, only to let Exeter have the ball on a fumble.  Cox tackles Phelan, at a big loss, and the latter has to kick but Exeter gets the ball. Thomas tries a long pass to Phelan, but Cox breaks through and clasps the leather in his arms, with no advance.

Failing to gain, Knapp kicks and Phelan rushes five yards, being tackled by Hinkey.  Irvine rushes three yards but that is all, and again Phelan has to kick to Knapp who makes a fair catch on the 25-yard line.  Knapp puts the ball in play by making a fine drop kick beyond the centre of the field.  Phelan tries to return it but kicks outside, and Andover gets it.  “Old” Woodruff makes an elegant rush of twenty yards, but Andover comes to a standstill and Exeter gets the ball.  Phelan rushes ten yards but very kindly lets us have the ball, and Woodruff and Hopkins each make five yards.  Andover gets offside but Exeter can do nothing, so Phelan kicks and Knapp soon tries for goal but Exeter makes a touchback.  At the 25-yard line Maxwell makes five yards and then Grouard by good blocking rushes twenty-five yards.  Failing to advance further Phelan punts, and Knapp has to make a touchback. At the twenty-five yard line. Hinkey advances six yards, but Knapp soon has to kick, and send the ball to the centre of the field.  There were four minutes more to play, but it was so dark that little was done on either side, so the teams did little but exchange the ball.  Andover had defeated her great rival once more.  Phelan and Grouard did especially well for Exeter, and had their rush line been stronger the backs would have made a much better showing. 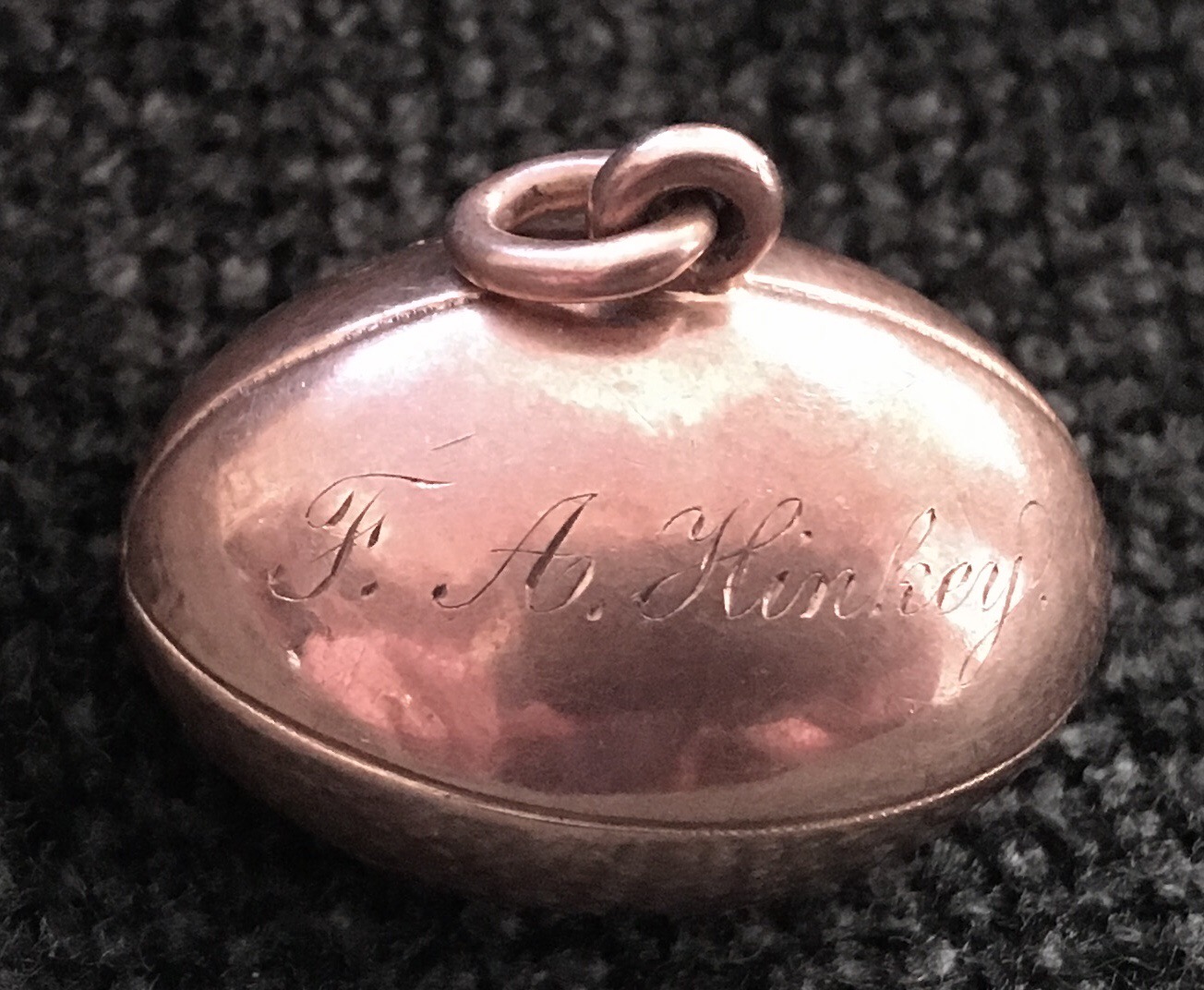 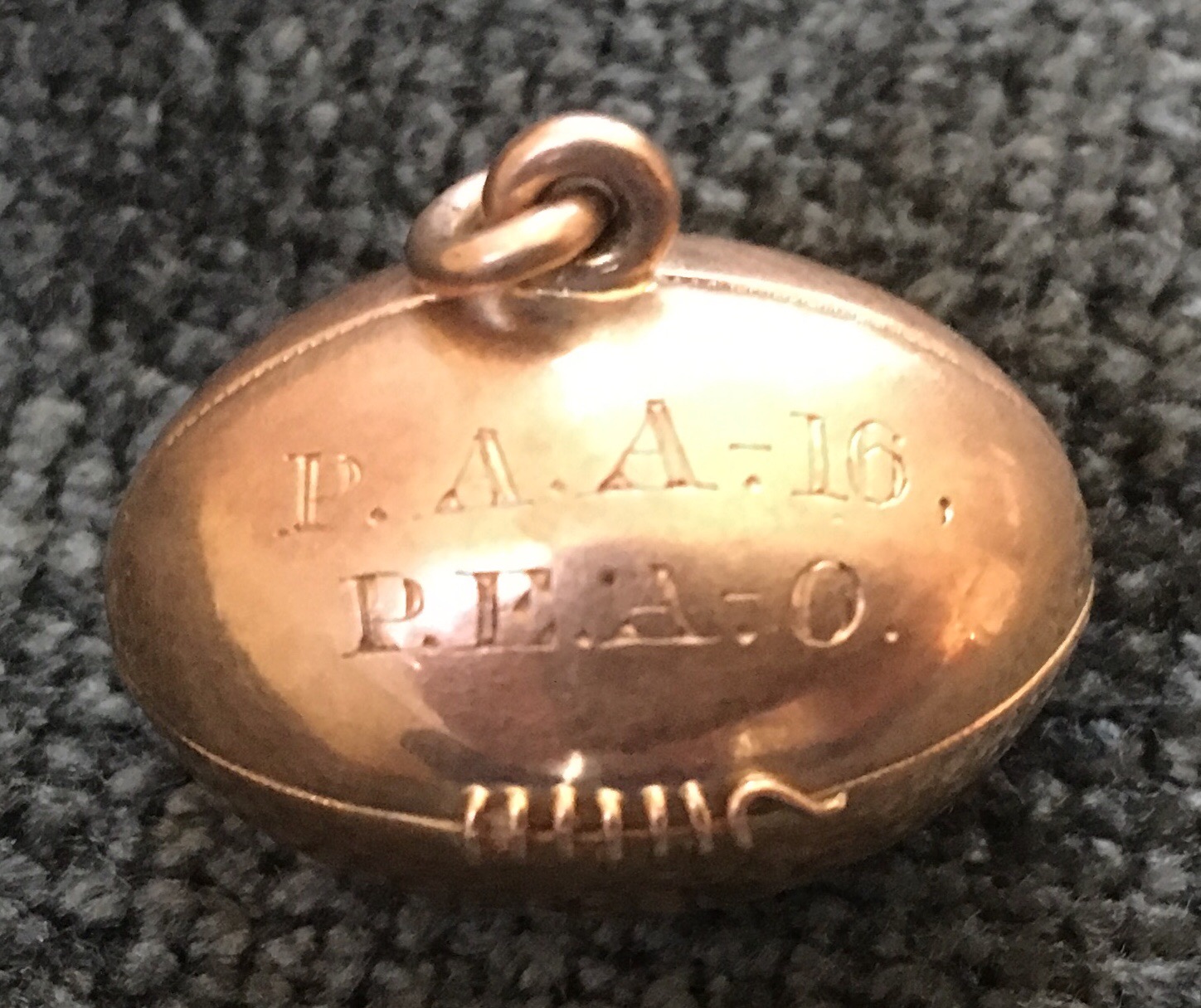 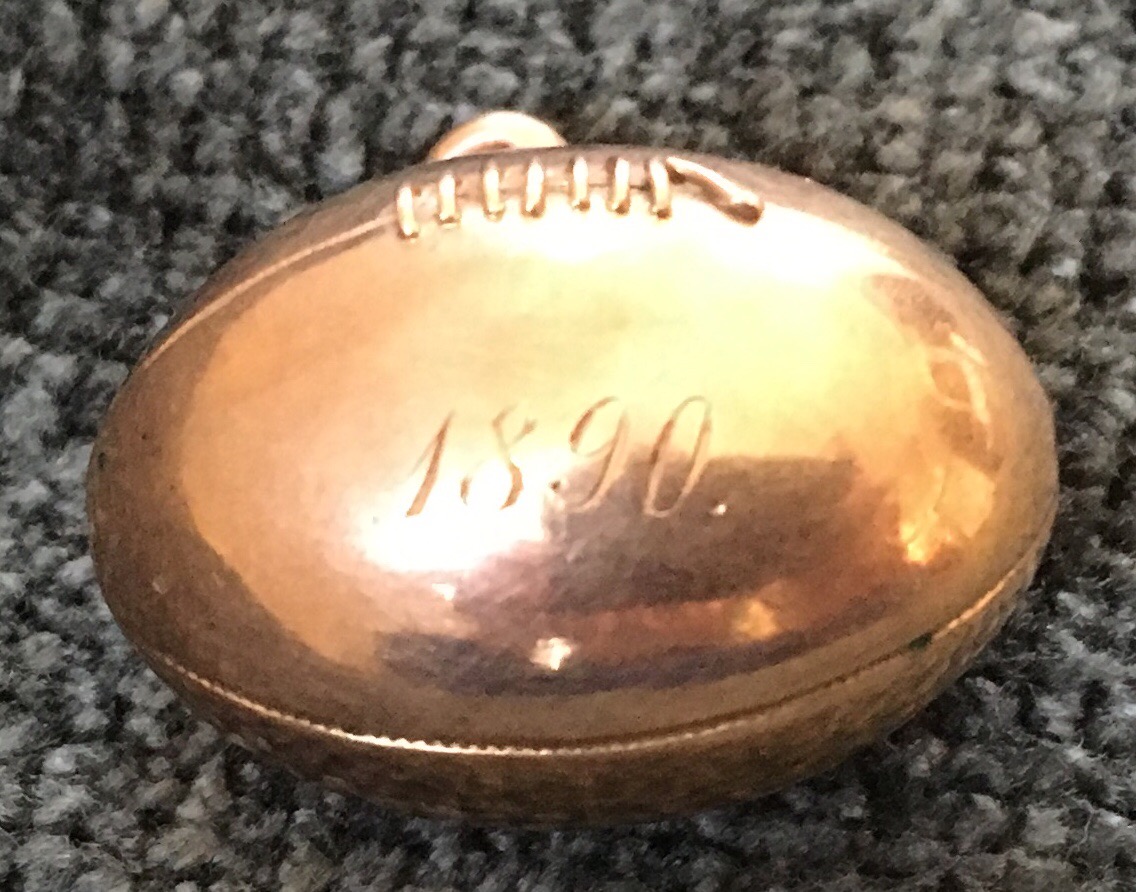