Please note:   Minor edits were performed on this obituary to correct subtle errors.  These corrections are in italics. 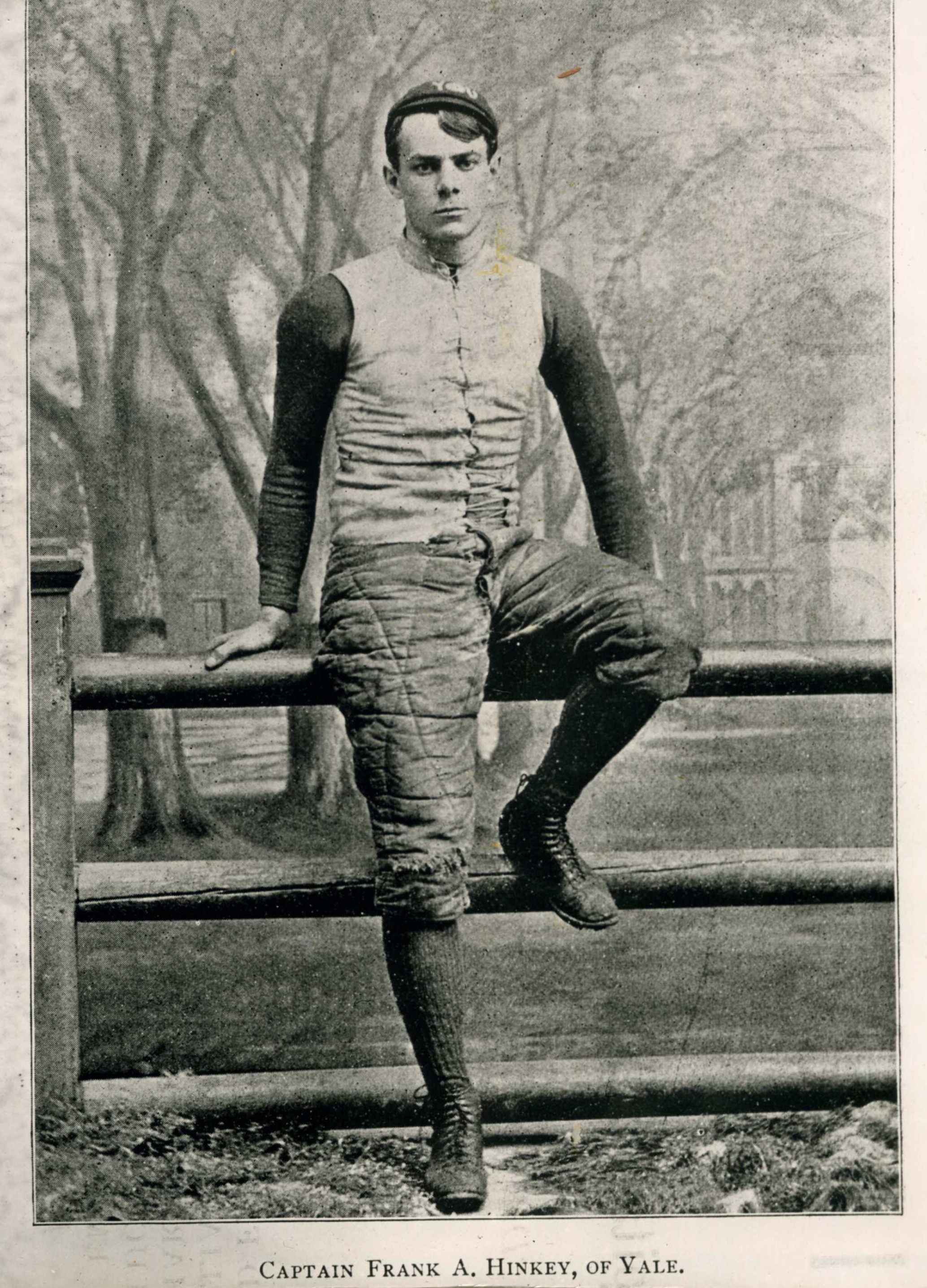 Frank Augustus Hinkey, "The Silent Captain" of Yale football teams of 30 years ago, missed a tackle at last and illness has scored.  One of the greatest ends of all time, in the opinion of veteran observers, lies dead in Southern Pines, N.C.

Hinkey played football in the days of giants, flying wedges, tandems, hurdling and pile-ups - a 150 pound wingman pitted against bruising backfields and it is recorded that never did the fleetest back round the end guarded by the "Silent Captain".  His football was that of the old days - a battle to unconsciousness and the survival of the fittest.

Yale and Harvard met in Springfield, Mass, in 1894 and Hinkey was Captain of the Blue.  Two mighty linemen, Hickok and McCrea, played for Yale that day and Brewer was Harvard's star halfback.  Before the battle had ended 22 men had been forced from the field and many of them went to the hospital.

In this contest Hinkey, always reticent where newspapermen were concerned, encountered scaring criticism for his activities.  Butterworth had been compelled to retire from the fray with serious injuries, one of his eyes torn and bleeding.  Then Wrightington of Harvard, ball tucked under his arm, raced at Hinkey's end and the spill that followed was terrific.  However on this particular play the Hinkey who performed the tackle was Frank's younger brother, Louis.

Wrightington, it developed, had been severely hurt and there was a storm of criticism with Frank Hinkey as the center.  He was charged with having "kneed" the Harvard man when his brother fell upon him after the tackle.  Frank Hinkey was 15 yards away from the tackle but newspapermen charged the elder Hinkey for the attack.  But the players of Yale and Wrightington himself denied that there had been anything illegal, explaining that Frank Hinkey always had tackled legally and played cleanly throughout the game.

Last night Wrightington at Boston expressed keen regret at news of the death of the great Yale star.  "He was a great player," Mr. Wrightington, now a Boston businessman, said.

"Frank Hinkey was the greatest end that ever played football.  He always played a hard game which had many to believe that he was a dirty player, but such was not the case.  He was a decidedly clean player.  As coach Hinkey was a great believer in the lateral pass, which was his specialty.  We will all miss Frank - particularly those of us left who played with him and knew his characteristics and traits better than anyone else."

Of himself and the charges against himself Hinkey once said, "I'm no murderer, no strangler, no bone-breaker, I have no idea of injuring a man when I throw him, but I do want to throw him so hard that he will not get up before I get a fresh grip on him so that he can't advance the ball.  What do they want me to do - have a couple of linemen run in from the sidelines with a soft mattress for me to throw him on?"

About a dozen years ago Hinkey was made head coach at Yale but remained for only a couple of years.  "Hinkey as a coach was years ahead of his time." TAD Jones, Yale head coach, explained his mentor.  "He played no small part in placing the gridiron on the high plane it now occupies".

Many football followers trace the birth of the modern game to the game at Springfield 31 years ago in which Hinkey was falsely criticized, but the forward pass and other open plays, derivations of Hinkey's lateral pass, were to come several years later.  Hurdling went out when some year later Hurly of Harvard was badly hurt in bringing down a man who attempted to leap over him.

Hinkey was a native of Tonawanda, N.Y., and gained his first athletic honors at Phillips Andover Academy at Andover, Mass.  From there he went to Yale in 1891 and played varsity football four years, being elected captain the last two.  After leaving college he returned to Tonawanda where, with his brother Louis, attempted to rebuild the family building supply business but failed.  In recent years he had been a salesman in the South, drawn there by the pine forests which were supposed to help him fight his illness.

The death of Frank A. Hinkey cast a shadow over official and unofficial Yale football circles.  Hinkey is a tradition at Yale and although unknown to many of the undergraduates his name was familiar in football discussions.

T.A.D. Jones, head football coach at Yale, said that his death was a genuine shock.

"He was the highest type of a sportsman," Jones said.  "his death is a personal loss to me, a loss which I will never forget.  He was the greatest end that ever lived and was one of the cleanest football players I have ever seen."

Frank S. Butterworth, who was a teammate of Hinkey, said he had played football with Hinkey in many games and had "never seen his equal."

"He had always been considered the greatest end the game has produced," Mr. Butterworth said, "and believe that many years will go by before his equal will be seen.  He was an exceptionally light man, and in his own way, very effective."

"He was a thorough sportsman.  He coached at Yale and was the first to introduce lateral passing, although not experimenting with the forward passing game, as it was against the rules at that time."

Professor William Lyon Phelps, described Hinkey as the "the greatest football player the world ever produced."

"He was the most silent I ever knew.  Once, immediately after Yale had won the championship of the 'Big Three,' a reporter asked him for some comment on the game.  Hinkey looked at the ground for five minutes as though thinking up a long statement and then said: "Yale won." 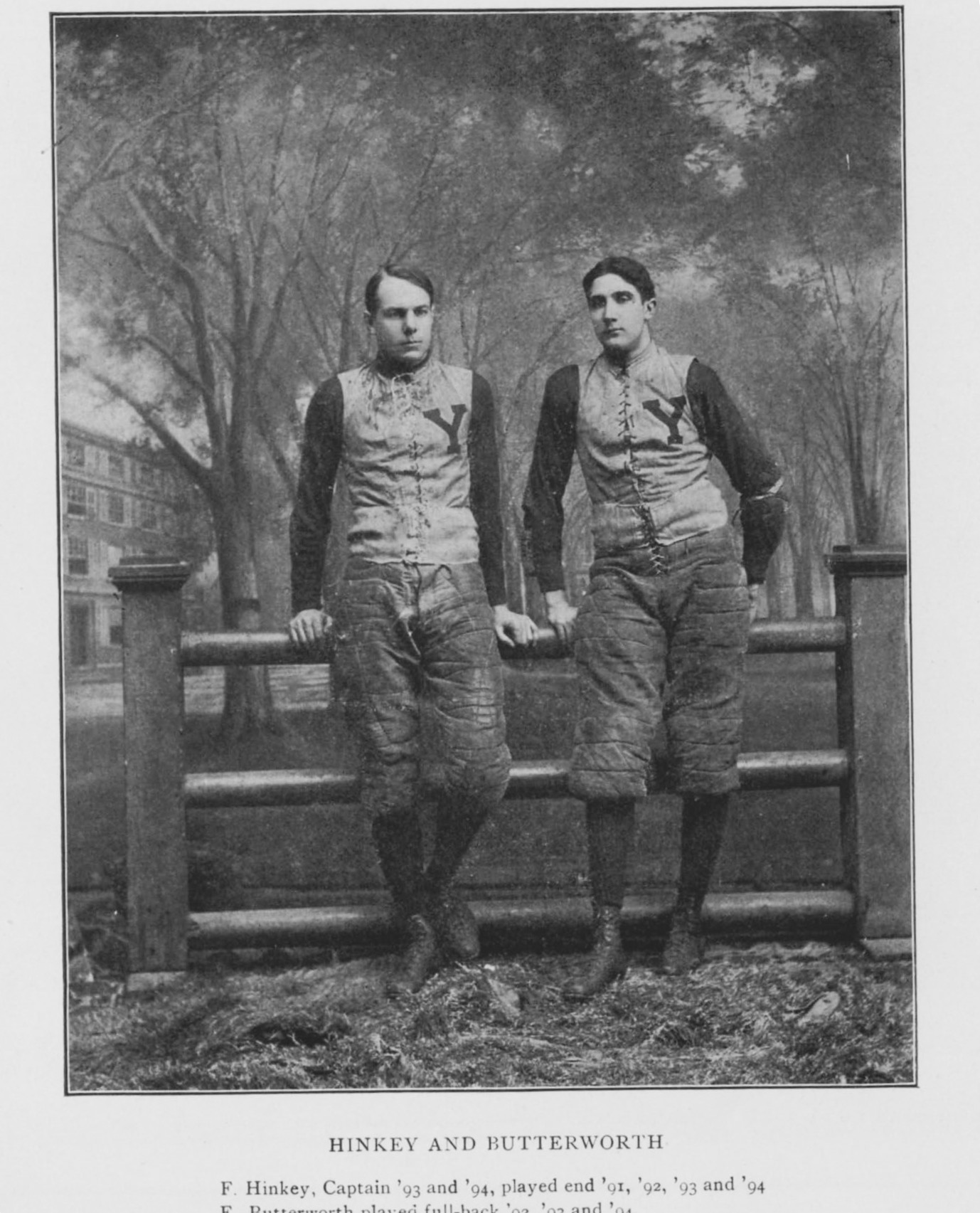