The death of Frank Hinkey, ’95, calls back to the memories of the football followers of Yale’s palmy days of the early Nineties, the most remarkable player who perhaps ever wore the Yale blue.  Those were the mass-play days, to be sure, with their close formations, steam-roller tactics, and the Deland flying wedge that descended on the first Yale team that faced it much as an express train might upon some thoughtless party peacefully picnicking on a railroad track.  The kind of end play that Hinkey developed out of his genius for the game, belonged to that period, though we have an idea that he would have topped the heap under modern play just as well.  In play he was a panther on the attack, a shadow flitting through the opposing rush line on defense.  There was no one like him in his own day, and we think few if any have surpassed him since, in the uncanny knowledge he had of where the ball was on each play and in the extraordinary capacity he had of flooring the runner hardly had he started, totally regardless of how many men were delegated to stop him. 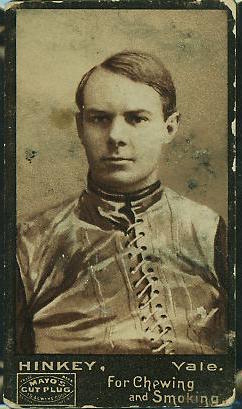 But Hinkey was more than a player.  When he coached after graduation, as he did annually almost until he became head coach, he displayed football brains of a high order.  He was essentially a strategist both in play and plan.  He overdid this as head coach, perhaps, with his lateral passes and runs – or perhaps his material did not fit his theory.  But the brains were there.  He was Yale’s “Silent Captain,” though what little he did say, as was the case with Mike Murphy, the trainer, had a lot in it.  He is already a legendary figure, standing out from the dusk of an earlier time as one of the greatest exemplars of modern football that Yale has had, perhaps the greatest.  But the legend should not take the form only of his physical feats, amazing as they were and beyond the capacity of most of the players of the time to emulate.  The painter of Frank Hinkey’s picture will put football brains as well into it.