Synopsis of the 1892 Yale vs Princeton football game played on Thanksgiving Day (November 24) at Manhattan Field in New York City.

Yale again earns her title to the championship by her defeat of Princeton yesterday afternoon at New York.

The day was almost perfect for the game although at the start a strong wind made the punting very uncertain.  The game was won strictly on its merits, and although Princeton put up a stubborn and well contested game, she was fairly out-played at every point.

Yale took the lead at the start by scoring her first touchdown in two minutes’ play; after this Princeton took a decided brace and were very successful in preventing Yale from making any large gains around the ends, Captain McCormick giving most of his attention to bucking the line.

It is difficult to make any comment on the individual work of the team, for every man played for all he was worth, and to all equal praise is due.  The fine work of Yale’s center was one of the strongest points of her game; Stillman fairly out-played Balliet, his stopping of Homan’s punt and then scoring a touchdown after a twenty-five yard run was one of the most brilliant plays of the season. 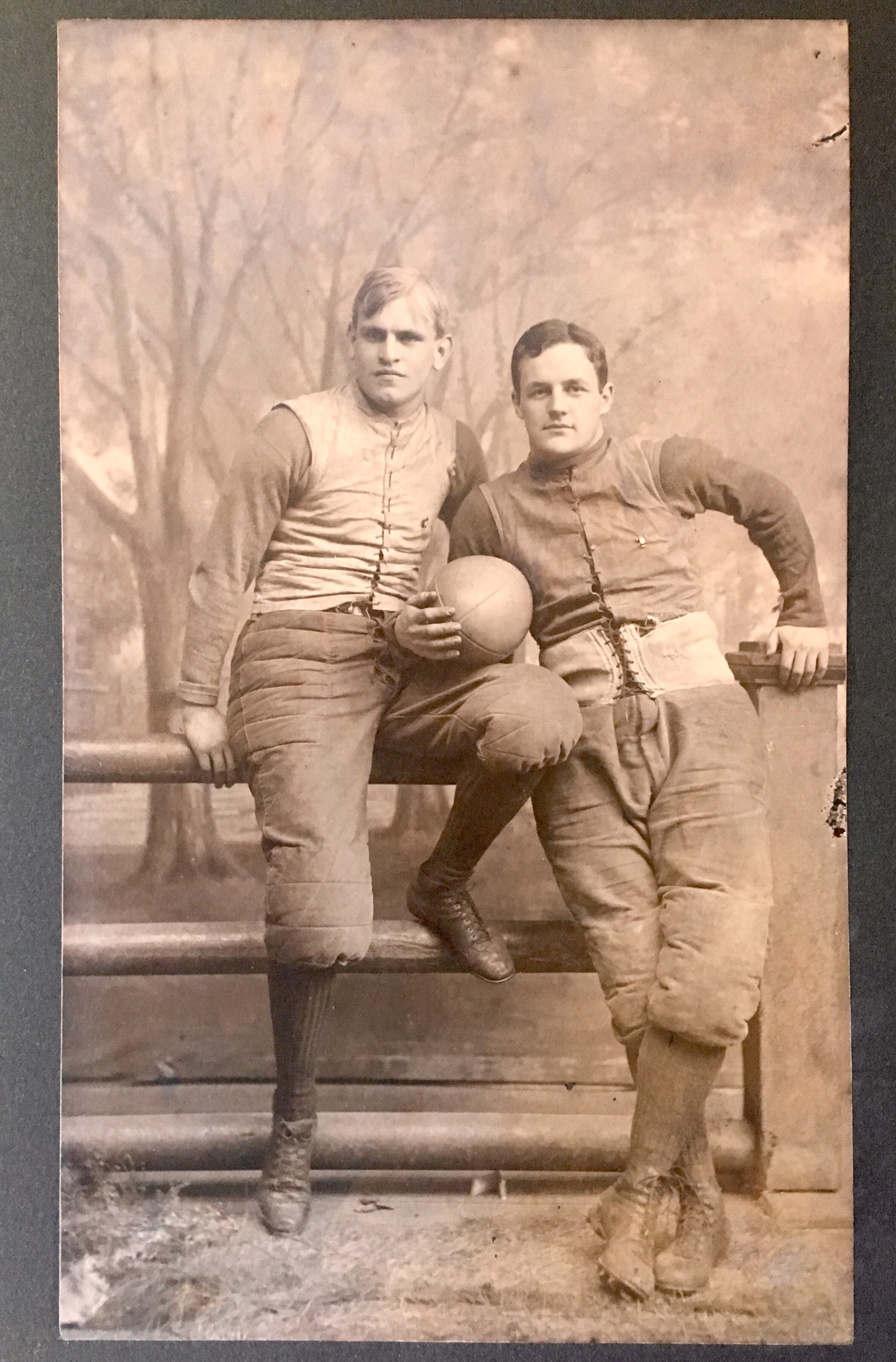 Hall did a great amount of scrapping when there was no need of it, but it was most noticeable that the moment the ball was put in play McCrea had him safely out of the way.  Hickok at the other guard also played a fine game.

The best tribute that can be given to Hinkey is that he outplayed himself, he was always on the ball when it was fumbled, his tackling and interfering were of the highest order.

Greenway on the other end, put up the best game he has ever shown, he tackled low and hard, and was in every play.

Captain McCormick, at quarterback, is beyond comment, his clever handling of his team together with his own grand individual work, were the chief causes of Yale’s fine showing.

Both the Blisses played finely, the run of Laurie’s in the first half being the most brilliant of the game.  The interference and tackling of both were exceptionally good.  Butterworth punted well, and as in the Harvard game his bucking the center was very effective.

For Princeton, Harold and Trenchard did almost all the tackling on the rush line.  Homan’s punts were long, and relieved Princeton several times when Yale seems sure to score, but his attempts at goals from the field were very weak.  King and Poe did some fine tackling behind the line.  Morse was very successful in bucking the line. 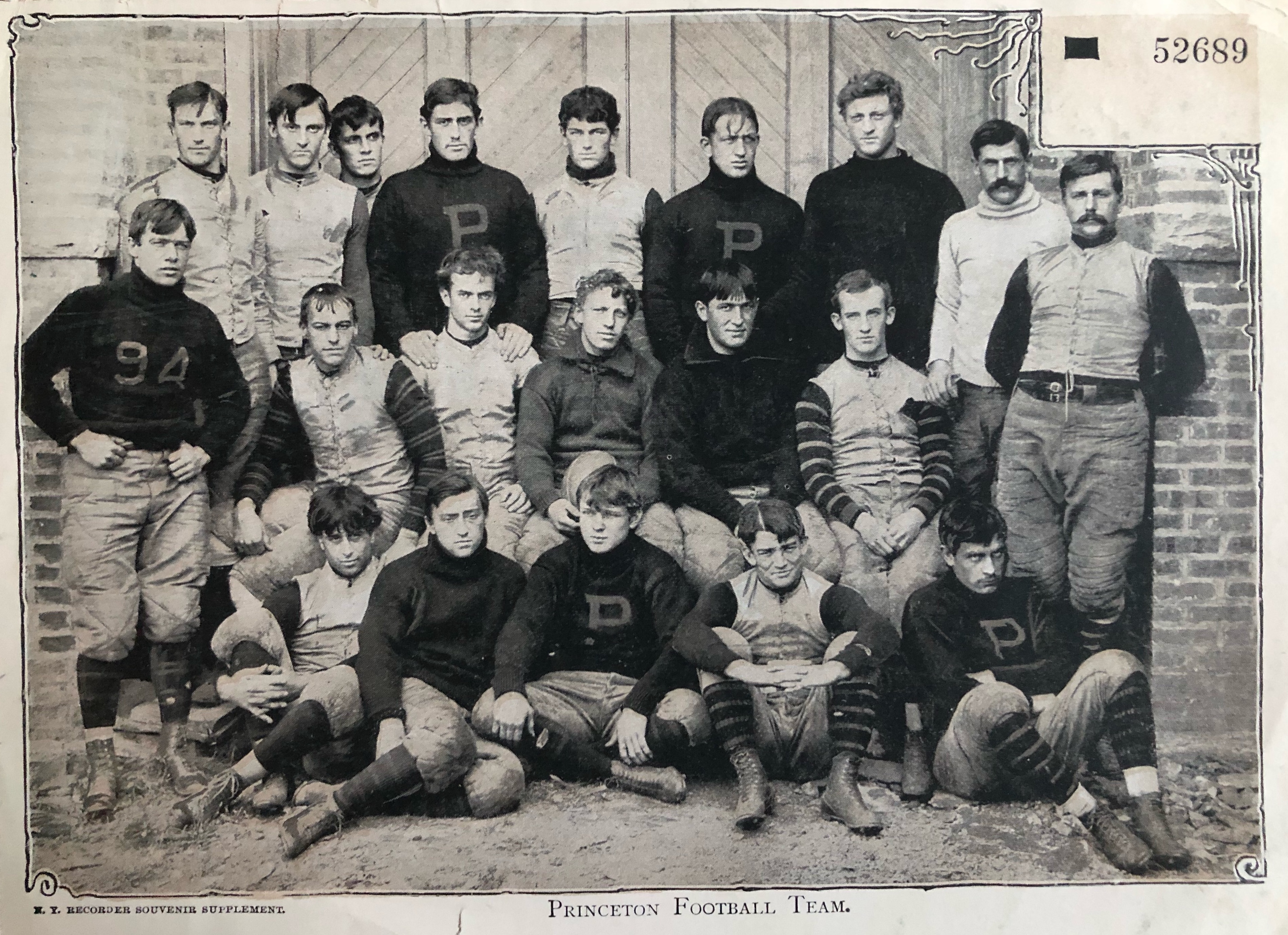 THE GAME – FIRST HALF

Princeton has the west goal and Yale the ball.  L. Bliss makes nine yards on the kick off.  C. Bliss gets around Trenchard for five yards, and L. Bliss circles the other end behind some very pretty interference and scores in just two minutes.  Butterworth kicks the goal.

Princeton takes the ball at the center and Morse gains twelve yards on the V.  McCormick prevents gain and Homans punts.  L. Bliss is given a fair catch on interference.  C. Bliss gets through the tackle for twelve yards, and Butterworth bucks the center for four yards.  Two fumbles in the center give Princeton the ball.  Morse gains two yards around Yales’ right end, and Lea makes a pretty rush of six yards through the line.  Homans and Lea each make a yard and Homans then tries for a goal from the field from the thirty yard line but fails.  McCormick gains seven yards from the 25 yard line and Bliss gains his distance around the end.  Butterworth punts and Homans makes a fair catch on Yale’s forty-five yard line.  Winter downs Lea without gain, and a long pass to Randolph nets three yards.  Morse gains his distance through Wallis, but Lea fails to gain after trying twice.  Wallis throws Homans before he can kick, and it is Yale’s ball on four downs.

Stillman opens up the center and Butterworth rushes through for eight yards.  L. Bliss fumbles and Princeton has the ball.  Winter breaks through and gets the ball for Yale.  Trenchard tackles C. Bliss at a loss of three yards.  McCormick makes a poor pass and L. Bliss fails to gain.  Yale is given five yards for interference in the center.  Butterworth dives into the center for two yards.  L. Bliss gains four yards on the wedge, and McCormick tries it for five.  Trenchard prevents Butterworth from gaining, and Butterworth punts for forty yards.  Princeton’s ball on their twenty yard line.  Morse gains three yards through the line, and Homans punts to Yale’s forty-five yard line.  Butterworth falls on the ball. 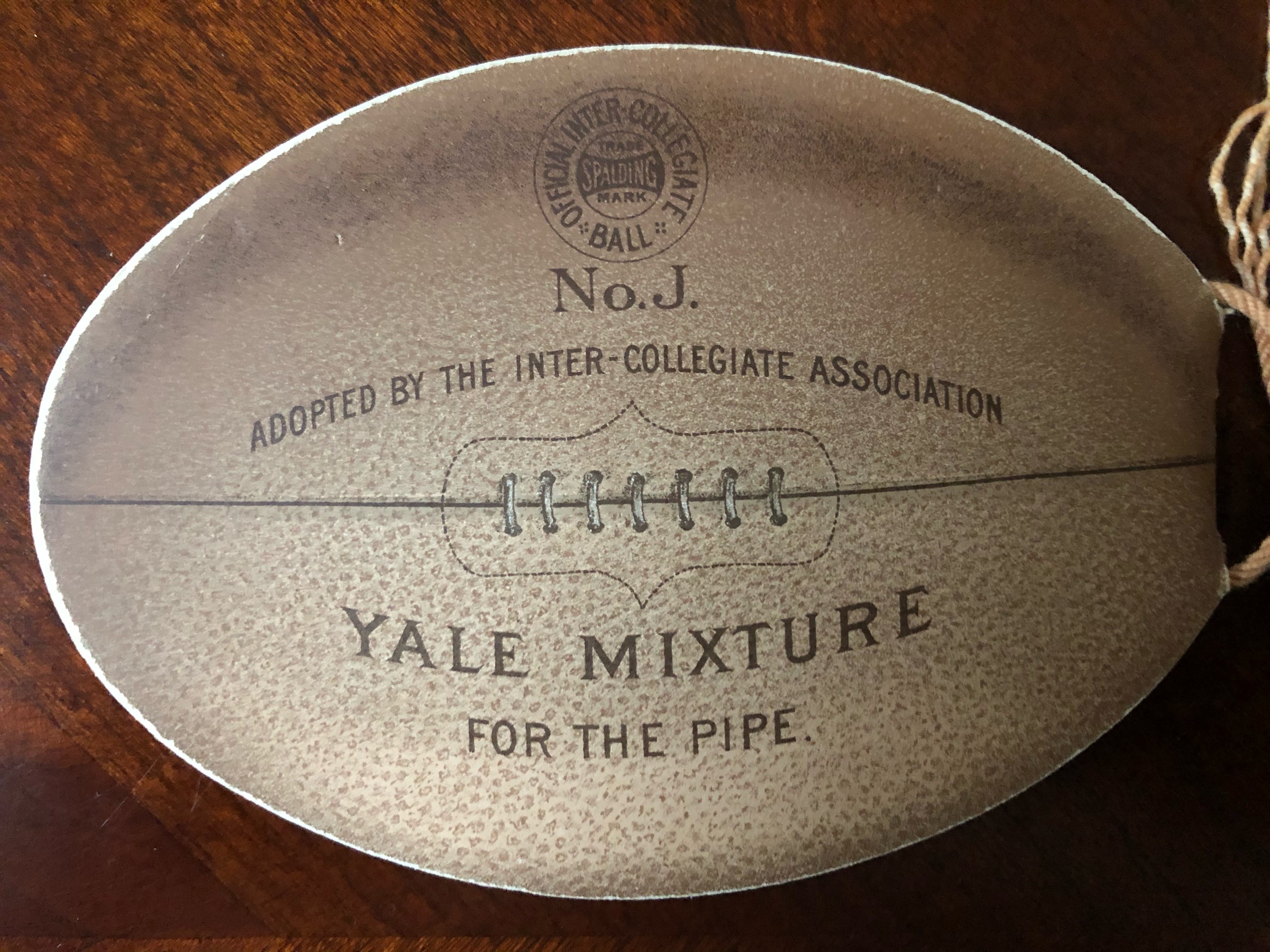 Wallis tries the line for two yards, and L. Bliss gains ten yards on the wedge.  Butterworth bucks the center for four yards but Harold prevents C. Bliss from gaining.  L. Bliss gets around the right end for four yards and Butterworth makes a rush for three more.  Harold tackles C. Bliss at a loss of three yards, a fumble gives Princeton the ball on four downs.  An attempt at a double pass and a tackle by Hinkey loses Princeton nine yards.  Homans punts and L. Bliss catches.  C. Bliss gets around the end for eight yards and Butterworth is shoved four yards through the line and then again for two yards.  Yale’s holding gives Princeton the ball.

Morse gets the through the line for six yards but Yale regains the ball on Princeton’s holding.  Butterworth gets through the center for eight yards in two tries, and Yale is given five yards for interference.  Butterworth fails to gain but the wedge and C. Bliss gains nine yards.  Princeton’s ball for holding.  Homans punts for forty-five yards and L. bliss falls on the ball.  L. Bliss loses four yards on a tackle by Morse but regains it on the next down.  Butterworth punts and Kings makes a fair catch at the center of the field.  The wedge gives Princeton five yards and Homans gains two yards through Winter.  Yale gets the ball on four downs.  L. Bliss gets through Harold for his distance.  Butterworth punts out of bounds at the center.  Poe gets around Hinkey for two yards and Morse three yards around the opposite end.  Yale gets the ball for holding.  L. Bliss circles the end for three yards and Poe makes a fair catch of Butterworth’s punts at the center of the field when time is called.

Princeton has the ball and Poe gains eleven yards on the wedge.  Homans tries the center with avail, but Lea gets his distance through Winter.  Poe fails to gain and Homans punts out of bounds.  Wallis and Winter each gain two yards.  Butterworth gets four yards twice in succession through Princeton’s center and three yards through Lea.  C. Bliss makes a pretty run of eighteen yards around Trenchard and Butterworth gets three yards through Lea.  L. Bliss dodges well for fifteen yards but the ball is given to Princeton on her thirty-five yard line for holding. 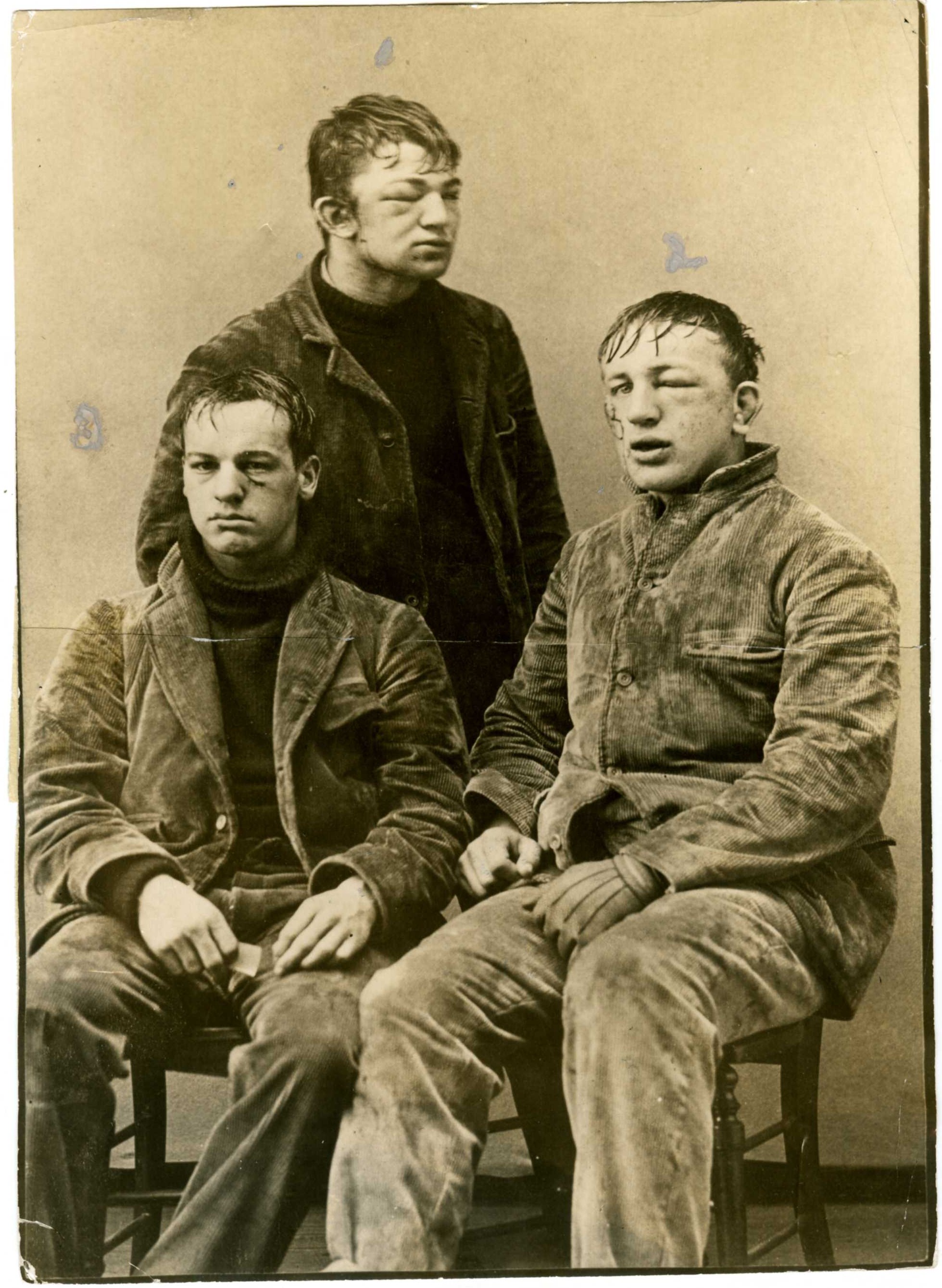 Poe fumbles but King drops on the ball.  Homans drops back for a punt but attempts to run, advancing five yards.  On the next down he punts to L. Bliss.  L. Bliss gets around Randolph for twelve yards and is thrown heavily by King.  Butterworth is unable to find a hole, but finally gets through Lea for five yards.  Wallis makes a gain for four yards. Winter and Butterworth fail to gain, and Princeton gets the ball on four downs.  Poe tries the line for two yards.  Homans punts to Butterworth, who is thrown, which gives Yale five yards.

Butterworth gets four yards through Harold, and then four more on the revolving wedge.  Butterworth gets ten yards directly through the center.  Trenchard downs L. Bliss before he can gain.  Butterworth is sent twice in succession for two yards.  Princeton gets the ball for holding.  Poe gets through Wallis for a yard, and Wheeler is sent through the center for three yards.  Homans drops back to punt.  Stillman blocks the ball and falls on it as it rolls back over the line, giving Yale her second touchdown.  Butterworth kicks the goal. 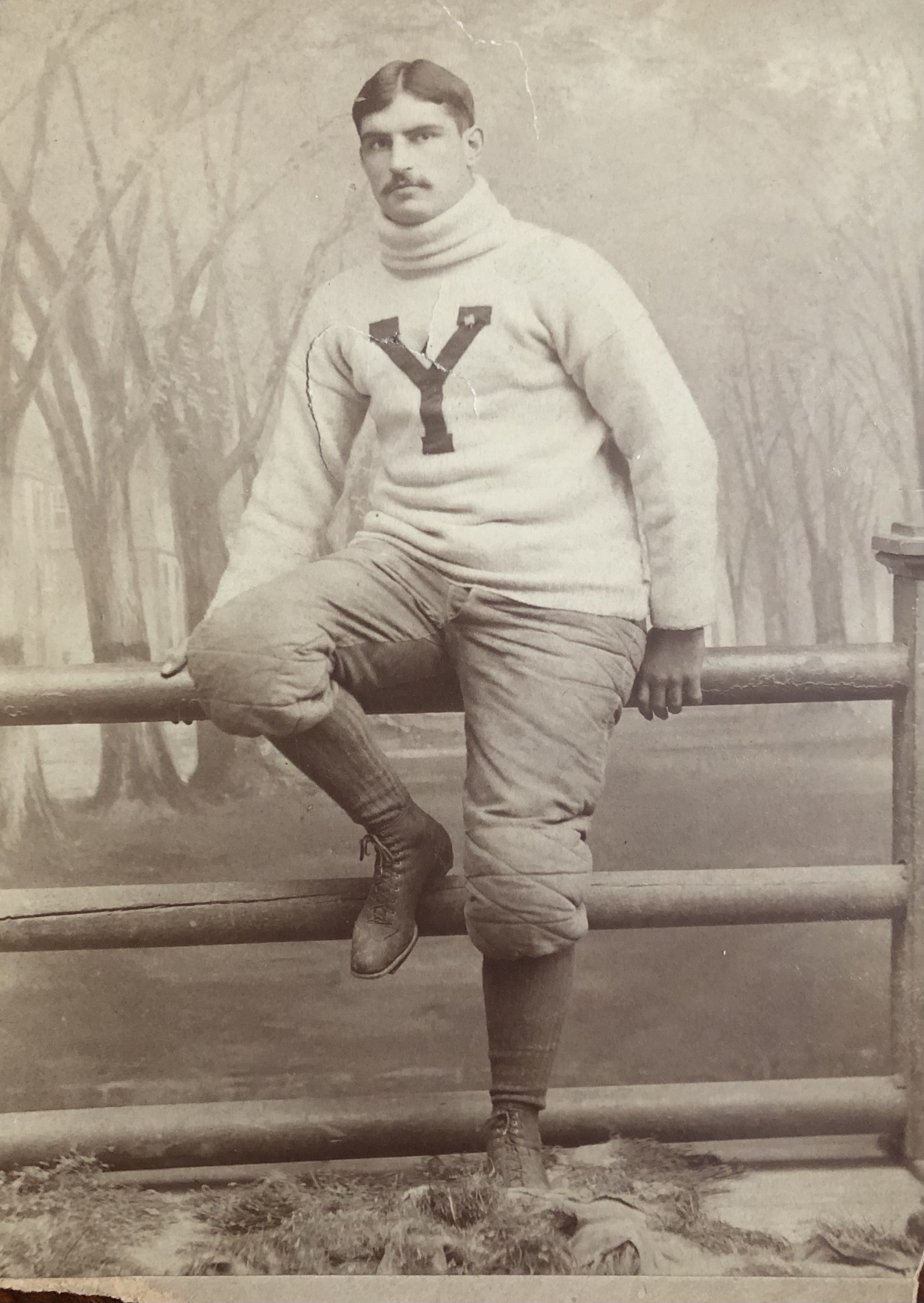 The wedge nets eight yards for Princeton, and Homans bucks the center for three yards.  Harold gains his distance but Trenchard is tackled at a loss of three yards.  Morse gains five yards around Greenway and on the next down is finely tackled by McCrea before he can gain.  Wheeler galls a yard.  Homans punts and it is Yale’s ball on the ten yard line.  Butterworth punts to the center, Poe catches and runs thirty yards before being downed by L. Bliss.  Poe tries Greenway twice for a yard gain.  Stillman breaks through and gets the ball.

Butterworth tries the lien but fails to gain.  Butterworth punts out of bounds at Yale’s twenty yard line and Princeton gets the ball.  Morse gains his distance and then loses it on a tackle by Stillman.  Homans tries for a goal from the thirty yard line and fails.  L. Bliss is injured and Graves is substituted.

Yale starts the ball at the twenty-five yard line, but the V only gets two yards.  Butterworth punts thirty yards to Poe, who makes a fair catch at the center.  McCrea breaks through and tackles at a loss of four yards.  Morse gets four yards through Wallis.  Homans punts, and Butterworth runs twelve yards before he is forced out of bounds.

Butterworth gets three yards through the center and on the next down eight yards on the revolving wedge.  C. Bliss gets around Trenchard for eighteen yards with Graves interfering.  Graves fails to gain around Randolph.  C. Bliss bucks the line for five yards and Butterworth is shoved through the center for five yards.  C. Bliss makes a pretty run of twenty five yards around the end with McCormick and Hinkey interfering.  Butterworth and Graves each gain their distance and the latter gets six yards around the end.  C. Bliss is sent twice in succession for three yards.  Butterworth falls a yard through the center, but Princeton is given the ball for holding, but Yale immediately regains it by forcing Princeton to four downs.  Bliss fails to gain and a mistaken signal loses two yards. McCormick tries for a goal from the field. The kick is stopped, but Hinkey gets the ball and runs 15 yards before being downed.  C. Bliss fails to gain.  Graves loses five yards on a run around the end, and Princeton is given the ball on four downs on Yale’s ten yard line, this gains three yards, when time is called. 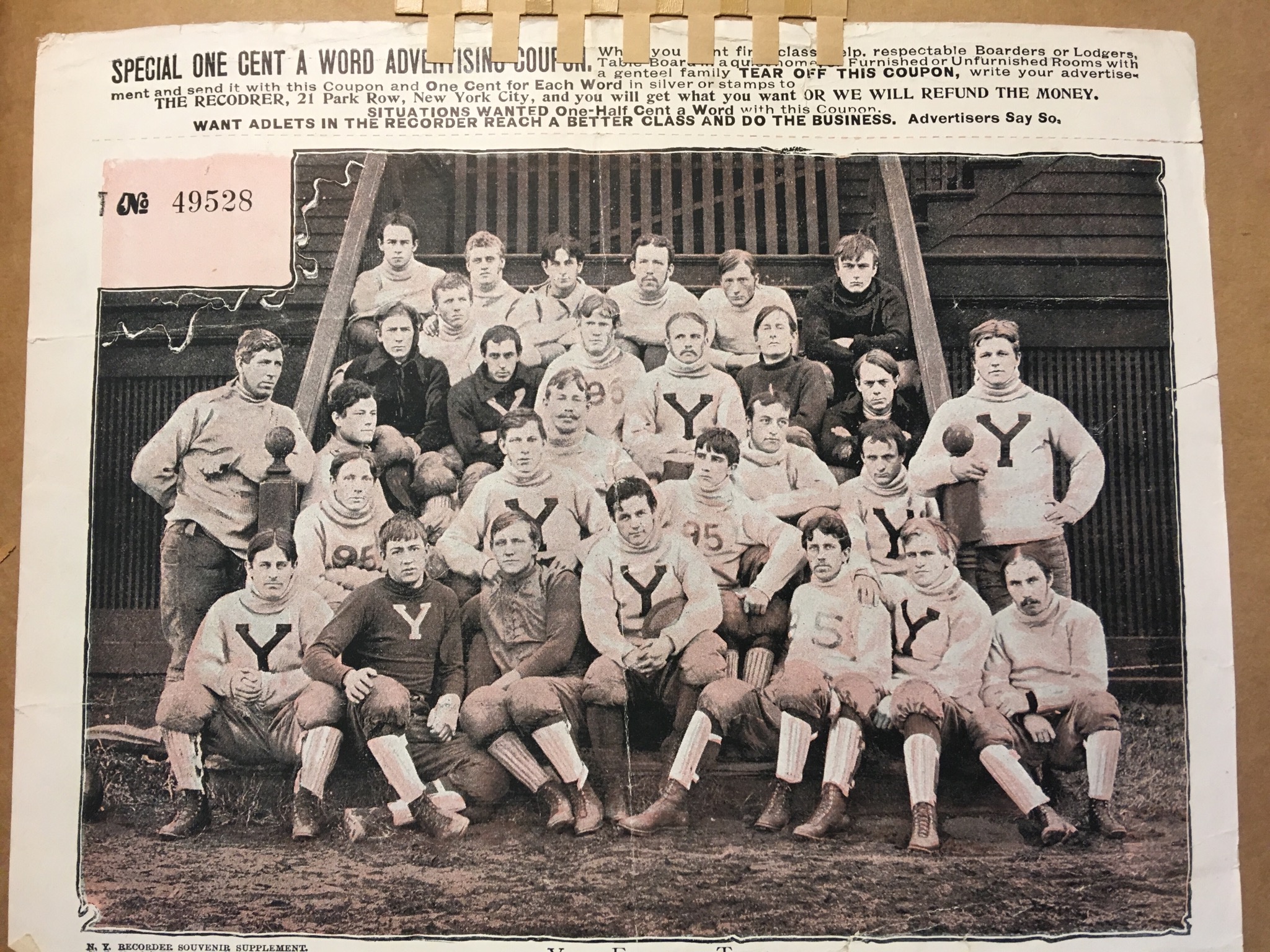