“Charon is at the Landing”

Tuberculosis has been known to mankind since ancient times. Earlier this disease has been called by numerous names including consumption (because of the severe weight loss and the way the infection appeared to “consume” the patient), phthisis pulmonaris and the white plague (because of the extreme pallor seen among those infected).

Even today after the development of advanced screening, diagnostic and treatment methods for the disease, a third of the world’s population has been exposed and is infected with the organism.  In the nineteenth century the concept of keeping tuberculosis patients isolated in a sanatorium started. In 1884, Edward Livingston Trudeau started the first sanatorium in the United States. Infectious persons were isolated from society and treated with rest and improved nutrition. (Mandal 2014).

In the fall of 1922 Pine-Crest Manor Sanatorium in Southern Pines, NC completed construction on a 22 private-cottage retreat specifically designed for the treatment of these unfortunate individuals.  Under the vision of their medical director Dr. Jamie W Dickie it was built on a crest of hill surrounded by long leaf pines which was the ideal location for consistent year-round warm weather and isolation.  The land on this 90-acre farm was leased by Thomas B. Wynn, which allowed Dr. Dickie to provide fresh poultry and dairy products for his patients at an all-inclusive bargain price of $25-50/week. 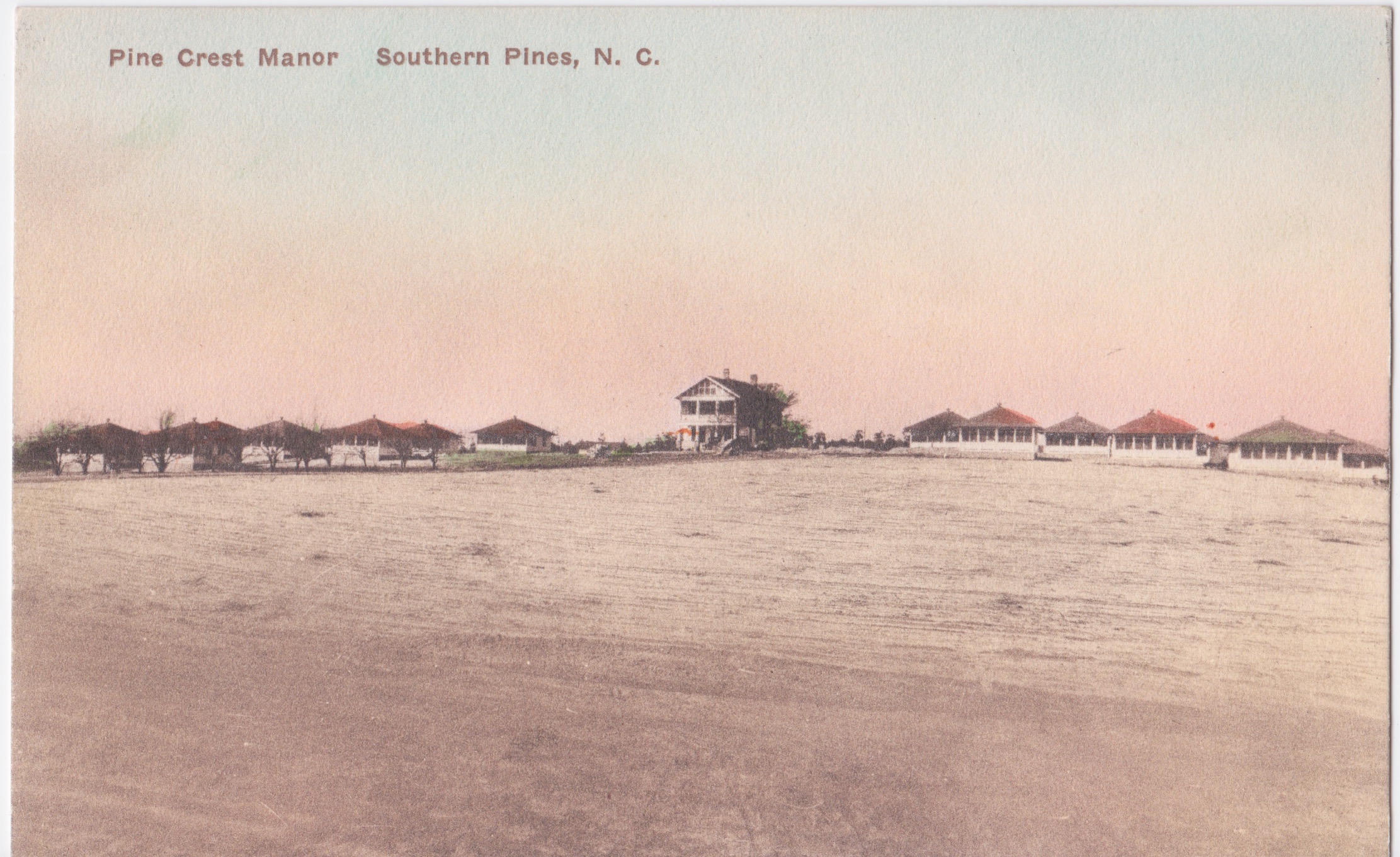 One of the first patients to reside at Pine-Crest Manor under the care of Dr. Dickie was a 52 year old traveling stockbroker from Tonawanda, NY.  This slim, sickly 5’9” 140 lbs. gentleman’s tubercular condition was accelerated by a twenty-year occupational exposure to toxic zinc smelting pollutants coupled with a lifelong smoking habit.  He entered this secluded southern retreat to spend his final days away from a gawking public and pesky newspaper reporters. The day before he succumbed to this illness on December 30, 1925 he sent a telegram from Pine-Crest to his closest friend and schoolmate stating only “Charon is at the Landing”; a Greek mythology reference to the ferryman of Hades who carries souls of the newly deceased across the river Styx from the world of the living to the world of the dead.  He contracted this death sentence as a young teenager, where physicians warned him then against strenuous activity and competitive sports.  Fortunately for the sake of college athletics and the legions of passionate sports fans throughout this country he blatantly ignored their advice and became the greatest football player to ever step foot onto a gridiron. His name was Frank Hinkey.

Ludwig Friedrich Jochim Heincke, the 4th of 6 children and only surviving son of Franz Detloff Lorenz Heincke and Auguste Charlotta Eleanore Hinrichs, was born in Mecklenburg, Germany on November 29, 1835, and came to Tonawanda New York in 1853 where his family changed the spelling of his name to ‘Lewis Hinkey’.  Initially Lewis opened a barber shop; then went to New Orleans.  Not meeting with the success he anticipated, Lewis returned to Tonawanda and worked at Sherman's hardware store.  In 1868 Lewis left Sherman's to form a partnership with John Nice, under the firm of Nice & Hinkey.  Nice & Hinkey became the largest ship-chandlery store in Western New York.  The following year Lewis married John’s daughter Mary Ann Nice, who was born in Clarence, NY on June 8, 1845 and resided at Grand Island before their marriage. They had six sons and three daughters: John Nice, Francis A., Frederick, Louis, Charles (died at 4 years old), Benjamin, Mary P., Barbara (died at birth) and Clara Nice.  Lewis died July 31, 1882, in the prime of manhood as a pillar of the local community. 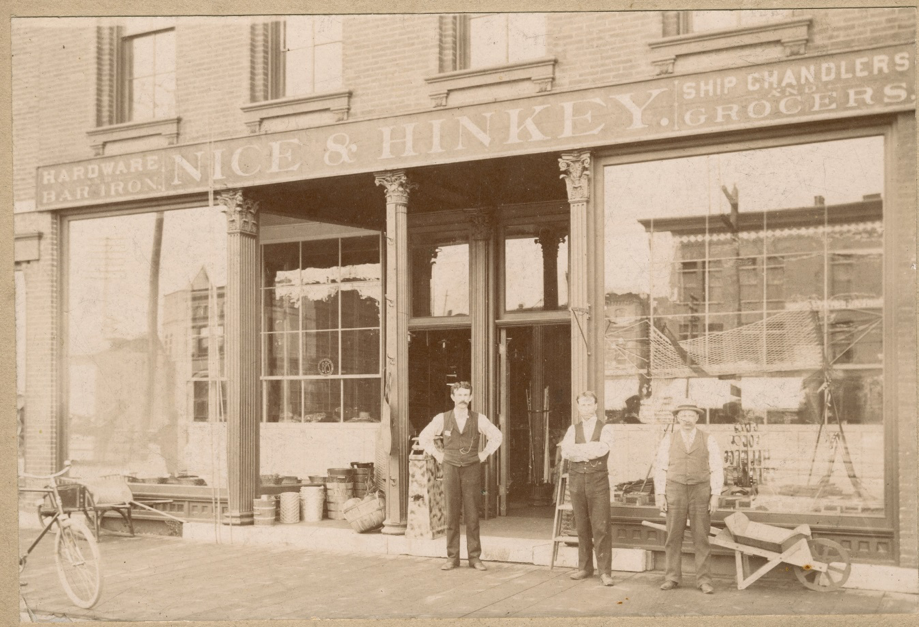 Francis Augustus Hinkey was born on December 23 1870 (or 1871; Frank never knew for certain). The third of nine children, he was raised in a strict conservative household where the rod was rarely spared.  After attending Tonawanda Union Elementary , Frank studied two years at DeVeaux Military Prep in Suspension Bridge, NY (current day Niagara Falls).  DeVeaux College opened in 1855 as a Protestant Episcopal boarding school for orphaned and destitute boys.  These boys (admission began at ages 9-12) were educated in academics and trade professions along with daily religious teachings.  Course work included mandatory military training with cadets dressed in uniforms in the style of the US Military Academy (USMA) at West Point.  Frank's mother sent her boys (John, Frank and Fred) to DeVeaux College a few years after their father passed away.  Frank reached the rank of 1st Sergeant during his two years there. He played centerfield on the baseball nine both years and competed in several schoolathletic events (high jump, 100 yd dash, barrel role).  DeVeaux had an association football game in 1886 which may have been Frank’s first exposure to American Football.  While at DeVeaux Frank was diagnosed with a pulmonary condition, later confirmed to be tuberculosis.  He was encouraged to live an easy, healthy lifestyle free from physical activity or strenuous exercise. That would include no football—especially in an era before protective equipment and safer regulations. At that time, football was so dangerous that even the legendary heavyweight boxing champion John L. Sullivan once declared: “Football! There’s murder in that game. Sparring! It doesn’t compare in roughness or danger with football.”

In 1888, Frank transferred to Phillips Andover Academy for three years of prep school.  Located in Andover, Massachusetts, Phillips Andover was established in 1778 by Samuel Phillips Jr as a Yale feeder school. Samuel’s uncle founded Phillips Exeter and the two prep schools remain bitter rivals to this day. That year “Tuffie”, as his roommates called him, played tackle on the English Commons eleven – an Andover intramural football team.  The English Commons were a row of five wooden buildings along the north side of Old Campus Rd, where students in the Scientific or English Departments were housed.  Different dorms would field their own intramural teams throughout the year for various school championships. English Commons tied Latin Commons 12-12 for the 1888 football championship contest. After playing for two weeks on the EC team he was recruited for the Andover second (scrub) squad. In the spring of 1889 Frank played 1st base for the English Commons intra-mural baseball team. 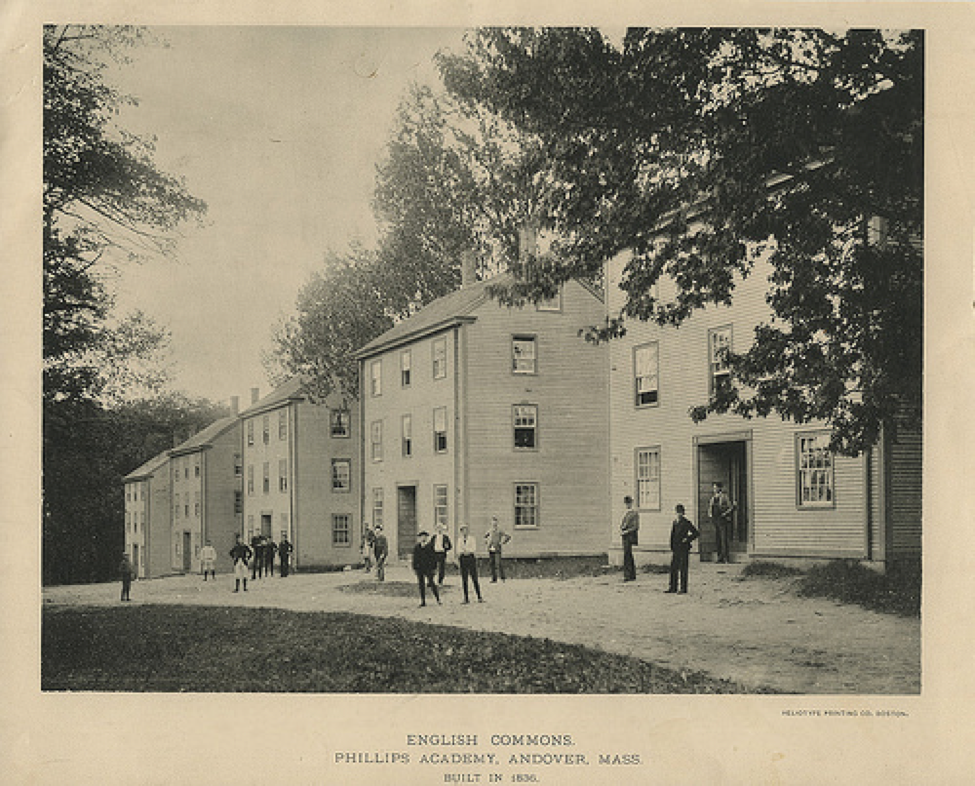 The Andover football team of 1889 was captained by Laurie Bliss, who succeeded his brother as the leader of the squad and was later a star Yale halfback in 1891 and 1892. Vance McCormick, future 1892 Yale captain, played quarterback for Andover that year. Frank was promoted because of his uncanny defensive ability and devastating blows. Initially discarded from the varsity squad because of his diminutive size, he quickly established himself as a prominent force amongst the bigger boys (hence the nickname “Tuffie”). He earned a local reputation for mercilessly hammering every blocker and ball-carrier who dared come around his end.

Andover went 7-3 that year with their only losses coming at the hands of Dartmouth (twice) and Harvard varsity football squads.  Unfortunately the Andover-Exeter game, the final and most important game each year, was canceled in 1889.  There was a small scuffle after the Andover-Exeter baseball contest the previous spring, where Exeter won 3-2. Player defections and rumors of ringers led to a one year suspension.  Frank was noted in several newspaper reports as a sure tackler and fine blocker as right end for the Andover eleven.  Hinkey also captained the English Commons Hockey team that year, where he played ‘cover’ (defensive position when teams had 7 men each on the ice).  He also played 1st base for the English Commons nine the following spring. 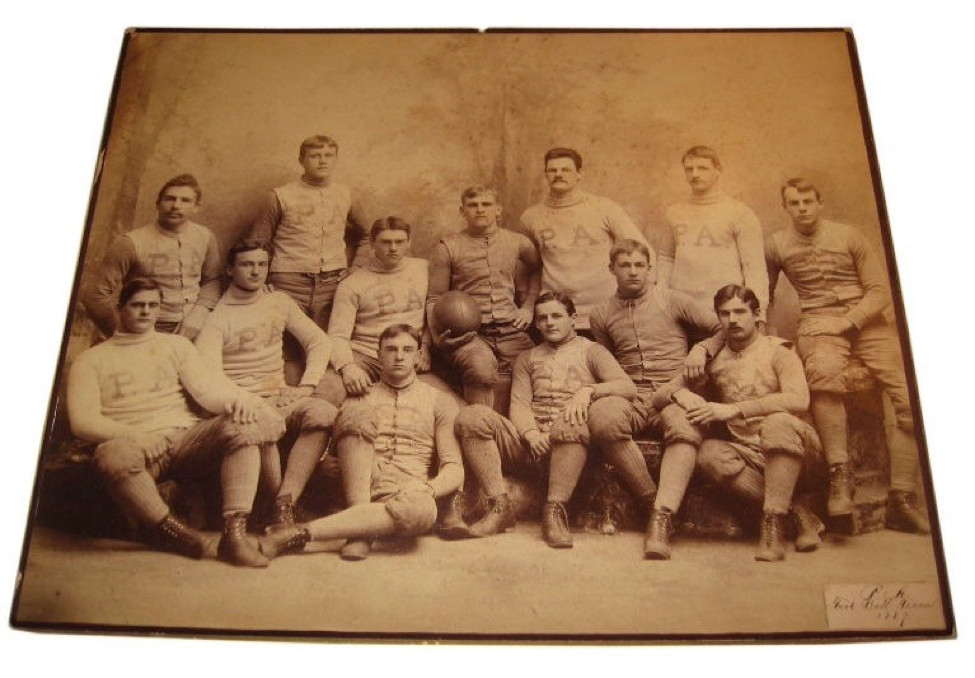 With the temporary Exeter-Andover ban lifted in the fall of 1890, much was at stake for the final football game that season.  The 1890 Andover team was captained by Frederick deP. Townsend, going 8-3 that year with loses against Dartmouth Varsity (twice) and Boston Athletic Association (a semi-pro team). However the harder fought contests were just preparation for the final showdown with Exeter.  Make no mistake about it, the only game that mattered that season was against their arch rival. Little did Exeter know that Andover had a secret weapon to unleash – Hinkey was going to run the ball.  Up until this point Frank was only known for his dominant presence on the rush line.  Per newspaper reports there is no prior mention of him ever carrying the ball. However with the pigskin in Frank’s hands Andover was unstoppable.  Hinkey gained over 60 yards rushing during the final contest, with reports commenting on his “snake-like” movements and magnificent tackling.  Andover beat Exeter 16-0 in front of the largest crowd to ever witness an athletic contest at either school (up until that point).   In Frank’s two years as right end for Phillips Academy (1889-90) the team won 15 games, ten of which were by shutout. 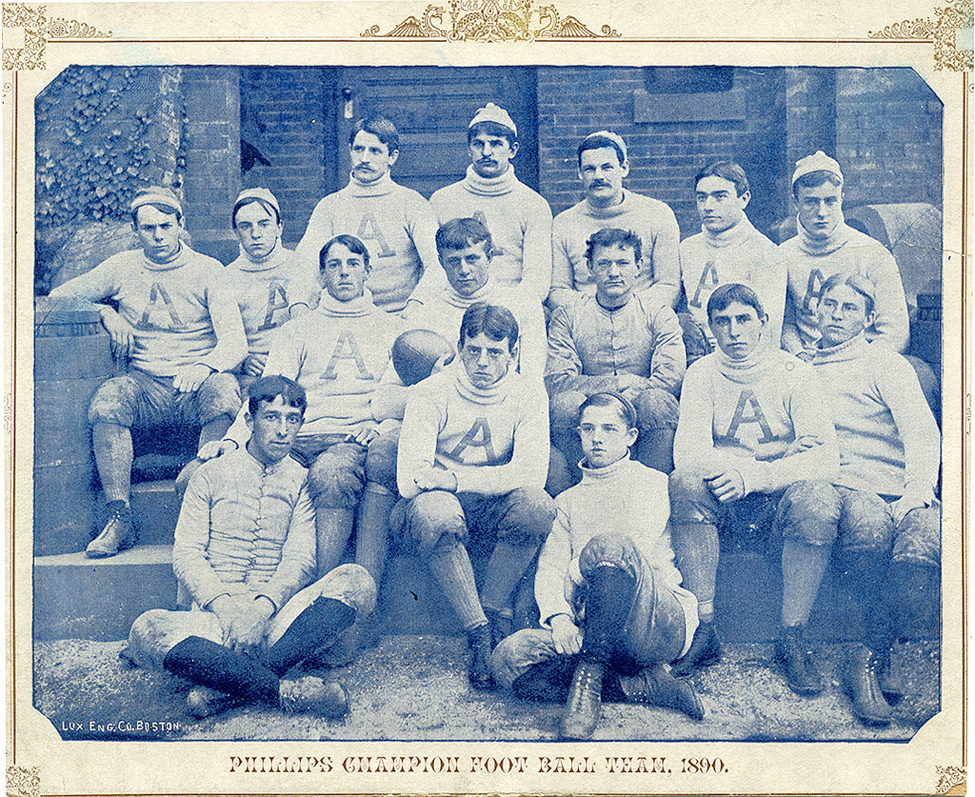 Frank also played for the varsity baseball team the following spring.  He started the season playing 1st base, then moved to 2nd base, then left field, right field, then ultimately the bench.  He returned to right field when Charles A. Crawford '92 sprained his ankle, keeping the position for the remainder of the season.  An average baseball player at best, he hit .234 that year and was noted for his aggressive base-running.  Frank also managed the English Commons football team that year and was elected Vice-President of his senior class.  He represented Andover in the annual athletic contest against Exeter in club swinging, rope climbing, and the parallel bars.  When he graduated from Andover in the spring of 1891 Frank was chosen the “Best Athlete” amongst his peers. Known as a shy, introvert off the field he earned the nickname “Silent Hinkey” from his Andover classmates cause of his dislike for talking within earshot of anyone whom he was not directly impressing an idea.  Frank penned this poetic note about himself to his graduating class:

Seldom he smiles, and smiles in such a sort, as if he mocked himself and scorned his spirit that could be moved to smile at anything.