Did Not "knee" wrightington 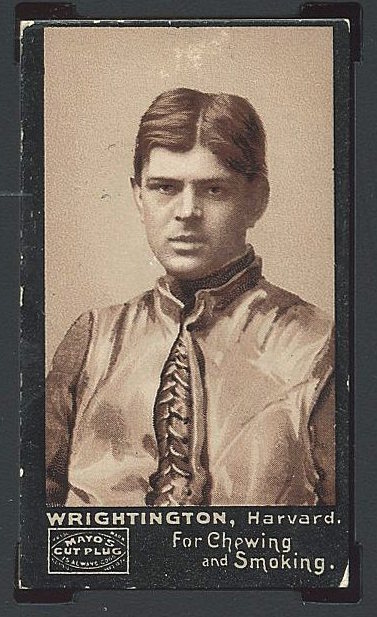 Investigation of Charges Against ex-Capt. Hinkey in Springfield Game.

Immediately upon the close of the football season the Yale Football Association, in view of the charges made against Capt. Hinkey of the Yale eleven, requested the following gentlemen to investigate the charges: Prof. E. L. Richards, Mr. Walter Camp, Mr. Henry E. Howland, Mr. George A. Adee, Mr. Howard Knapp, Mr. Eugene L. Richards, Jr., and others.

These gentlemen have found that all of the charges of roughness in the Springfield game have centered on the alleged willful injury of Wrightington by Capt. Hinkey.  They therefore requested all of the officials to give their testimony as to the occurrence, which is here submitted.  It should be added that these officials were unanimously chosen by both teams as men of recognized experience, capacity, and fairness in football matters.  This they have voluntarily and officially given, and, as they were upon the ground and nearer to the alleged play and in more advantageous proximity to the play than any other observer, their testimony should have more value than that of anyone else.

The committee examined Capt. Hinkey, who, although averse to carrying discussion into the public press, nevertheless, on account of the gravity of the many unfounded charges made against him, states, once for all and most positively, that he did not "knee" or otherwise maltreat Wrightington in the Springfield game, and that he has never been guilty of unfair roughness in any of the games in which he has taken part.  Furthermore, his statement is corroborated by the fact that, although he has played for seven years at Andover and at Yale, and hence under various umpires and referees, no official has ever found it necessary to adjudge him guilty of, or disqualify him for, unfair play.

The statement of Mr. Beard which accompanies this testimony gives the details of the play and accords with the independent statements of the officials, which have been made without consultation with each other and voluntarily.  These statements are in the possession of Prof. E.L. Richards and are as follows:

I enclose a clipping from an article in a newspaper entitled "Needed Football Reform".  In it it is stated that I saw Hinkey "knee" Wrightington.   I wish to say that I not only did not see this, but, as I saw the play, (and I was within a few yards of the men at the time.)  Wrightington was thrown perfectly fairly, so that his injury was the result of accident and not of malevolence on the part of any member of the Yale team.  So much has been made of this particular occurrence that I feel that this statement is due as a matter of justice and I hope that in the same spirit you will make it just as public as the paragraph which as called it forth.  I remain, yours very truly,  DAVID BOVAIRD.

Dear Sir:  In regard to the responsibility of the injury to Wrightington in the Harvard-Yale game, would say that the injury was a pure accident, which might have happened at any time, and it is impossible to place any responsibility.  The statement that the injury was caused by the vicious playing of Capt. Hinkey, with the intent to maim, is not borne out by the facts.  The attack upon Capt. Hinkey I consider to be unjust and apparently emanates from prejudiced persons.  Yours respectfully, ALEXANDER MOFFAT.

I saw no unnecessary roughness in the Springfield game, and I have not taken the least stock in the paper accounts about Hinkey.  He was no rougher than any of the other men from my point of view, and I was quite near.  He plays a good hard game but he never impressed me as a fellow who played with the intention of disabling a man, and I don't believe he does.  There is very little to be said, for I have said all I can.  I did not see him jump on the Harvard player, Wrightington, and don't believe he did.  GEORGE D. PRATT.

I did not see Hinkey "knee" Wrightington at Springfield, and during four years in which I have seen him play I have never observed anything which would warrant me in believing the accusations made against him.  Charges similar to these have been preferred in regard to other games, several of which I know to be false.  Considering all these things, I cannot believe Wrightington's injury other than accidental.   IRVIN McDOWELL GARFIELD.

The play in which Wrightington was injured occurred about ten yards from Harvard's goal, nearly in front of the goal posts.  Thorne had punted from about Harvard's forty-five-yard line.  Wrightington caught the ball on the fly and started to run toward the Harvard side of the field.  He was running diagonally across the field and I was running straight down the field in the direction of Harvard' goal line.  He had run about ten yards when I tackled him, both of us being on a dead run.  I made a diving tackle jumping and tackling him about the knees.  He fell on his side, falling toward Harvard's goal.  It was a hard tackle, Wrightington striking the ground heavily.  Before I made the tackle I heard Hinkey some distance behind me, shouting for me to tackle him.  (Wrightington.)  Wrightington got up almost immediately, working his shoulder.  I had heard the umpire's whistle for Harvard's off-side play, and when I looked back I saw Hinkey for the first time during that play, fully ten yards back toward our own goal, running toward the umpire, who had blown his whistle near the centre of the field.  Hinkey was claiming a penalty for violation of the rules by Harvard, which the umpire allowed, while Wrightington was being helped off the field by the Harvard players.  ANSON M. BEARD